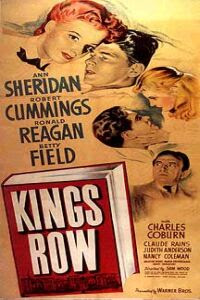 Dr. Alexander Q. Tower: In the 13th Century, man was happier and more comfortable in his world than he is now. I'm speaking of psychic man and his relationship with his whole universe.
Parris Mitchell: I get it, sir. Everything was so simple then.
Dr. Alexander Q. Tower: That was it, Parris. That was it. But in this modern complicated world, man breaks down under the strain, the bewilderment, disappointment, and disillusionment. He gets lost, goes crazy, commits suicide. I don't know what's going to happen to this world in the next hundred years or so, but I can guarantee you life isn't going to get any simpler. Worry and doubt bring on a bellyache. Mankind's building up the biggest psychic bellyache in history.

"A good clean town. A good town to live in. A good place to raise your children."
(The sign as you enter Kings Row)

KINGS ROW is an epic soap opera based upon the critically acclaimed, controversial novel by Henry Bellamann. Screenwriter Casey Robinson and Director Sam Wood deserve credit in getting most of the "good stuff" past the pesky old Hays Office. By "good stuff" I'm referring to the novel's bold examination of such topics as homosexuality, insanity, incest, suicide, medical malpractice, euthanasia, lust, embezzlement and plain old run-of-the-mill murder. These constitute exactly the sort of things Will H. Hays, head of the Motion Picture Association of America, vowed to protect the nation from being exposed to by the heathens in Hollywood. But if there is a will (pun intended) there is a way around him, and so this well-connected Republican lawyer (is there any other kind?), who had previously been the United States Postmaster General and the 1920 campaign manager for President Warren G. Harding, found himself snookered by Robinson and Wood thanks to their subtle, crafty and perfidious presentation of "morally unacceptable content."

Hallelujah! Maybe Will and the boys didn't catch on, but most moviegoers in 1942 did, once again proving the general population is far smarter than the probity police who try to protect us from the evils of sin and gin.

The exceptional cast is headed by Ann Sheridan, Robert Cummings, Charles Coburn, Maria Ouspenskaya and Claude Rains. Ms. Sheridan's portrayal of Randy Monaghan, "that girl from the other side of the tracks," is a remarkable combination of both strength and vulnerability, but it is probably the performance of future President Ronald Reagan that most people remember. This may very well have been his best on-screen performance prior to serving as America's Commander-in-Chief. In fact his famous line after he awakes to discover both his legs have been amputated -- "Where's the rest of me!" -- became the title of his autobiography, first published some 39 years later.

There have been a number of memorable films exploring the dark side of small-town America -- BLUE VELVET, LOLITA, TWIN PEAKS and PEYTON PLACE are several that come to mind -- but KINGS ROW may very well be the best of the lot. What elevates KINGS ROW above all others is the talent Executive Producer Hal B. Wallis assembled not only on the screen, but behind it. Special mention must go the the lush Cinematography by James Wong Howe, the striking Production Design by William Cameron Menzies and the memorable Music by Erich Wolfgang Korngold. All were giants in their respective fields, and their collective talents blended into making a classic film that resonates as strongly today as it did during WWII. 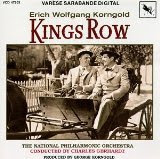 I mentioned that Korngold's music was "memorable." For those of you unfamiliar with Mr. Korngold, he is generally credited with "inventing" what is known as the syntax of orchestral film music. The score for KINGS ROW is one of the best examples of this and here's the kicker -- if you listen to it you will undoubtedly be amazed by the unmistakable similarity with John Williams' score for STAR WARS. Plagiarism? Some think so, and this isn't by any means the only such charge leveled at Williams.

Personally, I'm betting Mr. Williams is guilty -- guilty as the sin in KINGS ROW.
Posted by Robert A. Nowotny at 12:39 PM