SCHULTZE GETS THE BLUES 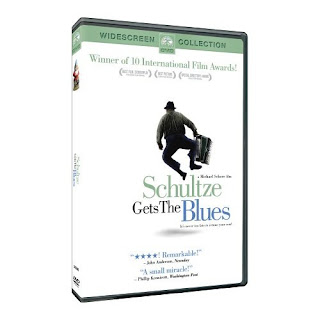 SCHULTZE GETS THE BLUES is one of the most unusual films you will ever see. The pacing is extremely slow, the dialogue almost non-existant and the overall style is so understated you will initially find yourself asking, "What's the point?"

Plenty. Forget the popcorn and pass the strudel...

Some things just take a little extra time before they succeed in taking you in, and first-time Writer/Director Michael Schorr makes a remarkably impressive debut in this unforgettable character study of an aging man who is forced into early retirement. Horst Krause plays the title character, and his droll, deadpan performance will definitely win you over if given the chance. This is a film about loneliness, boredom and the healing power of music. In this case it's good ol' zydeco music that captures the imagination and the dying spirit of an amateur German accordion player with little to live for now that he's saddled with nothing but free time on his hands. As Schorr so poignantly points out, retirement often is a dead end road with nothing to offer along the way. This is especially true if you have been working in a salt mine, literally, all of your life.

SCHULTZE GETS THE BLUES ultimately becomes a "road picture," similar in tone to Richard Farnsworth's endearing THE STRAIGHT STORY (1999). One main difference, however, is that director Schorr relies almost entirely on "mise en scene" to tell his story, something that is both rare and rarely well done. Mis en scene literally means "putting into the scene," and while there seems to be considerable misunderstanding regarding the meaning of this cinematic technique, it simply indicates that much of the story unfolds within the confines of a series of long-held, static shots. The information viewers need can be found in the background and in the foreground and in people/things moving into and out of most scenes as opposed to a series of edits each with a different angle or viewpoint. This second cinematic style is known as "montage" and it is by far the dominant technique used by filmmakers worldwide. Given what is called "today's MTV generation," rapid-fire montage editing will continue to dominate for years to come. Ich wunsche, dass dies nicht wahr war. (Sorry about the missing umlaut.)

Schorr deftly reveals through his leisurely-paced series of static shots a skilled sense of composition, a confident grasp of visually-induced narrative economy and a sharp, insightful eye for detail. He also provides a surprisingly generous portrait of American hospitality when Schultze is sent to my home town of New Braunfels, Texas to represent his East German village at the annual Wurstfest celebration. Sadly, Schultze fails to take the stage despite being warmly accepted by everyone he meets, giving cinematic credence to the saying, "In New Braunfels ist das leben schon!" Yeah, right... 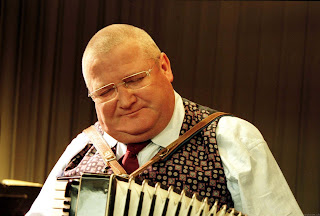 Schultze may have failed to take the stage in New Braunfels, but he succeeds in sailing to Cajun country where, ultimately, his journey (secular and spiritual) takes a surprising turn. As I previously indicated, SCHULTZE GETS THE BLUES is a very unique viewing experience. Like the blues, this is a film you will "feel" first and find meaning later. Maybe much later. But it will come...and you will get the point.

(For another example of mise en scene filmmaking I refer the reader to Otto Preminger's HURRY SUNDOWN (1967). What Mr. Preminger is able to convey within each wide-angle shot is amazing. You owe it to yourself to see what I mean).
Posted by Robert A. Nowotny at 12:34 PM