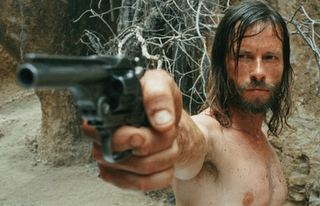 "Is that what we are? Misanthropes? Lord no, we're a family."

THE PROPOSITION is a film that Sam Peckenpah would call his own. From the very opening scene, a piercing gun battle that will make your ears bleed and your stomach cringe, this Aussie oat opus is a masterpiece of menance. Writer Nick Cave and Director John Hillcoat combine their talents to revitalize the Western genre and they do so with uncompromising, ferocious carnage that is as pitiless and primal as anything brought to the screen in recent years.

Needless to say, I loved this film.

Cave is best known as the controversial singer/songwriter who first shot to fame in the 1980's as head of a band called "The Birthday Party." He then climbed to greater prominence in the 1990's with "Nick Cage and the Bad Seeds." He's been quoted as saying, "I want to write songs that are so sad, the kind of sad where you take someone's little finger and break it in three places." While that may be true for his musical perspective, I can assure you his on-screen characters' trigger fingers are all in perfectly fine shape.

Guy Pearce (L.A. CONFIDENTIAL, RULES OF ENGAGEMENT, MEMENTO) gives a menacing and memorable performance as Charlie Burns, the middle aged of three brothers, who is given the choice of saving either the life of his younger brother or his older brother by the territorial head of police, Captain Stanley. Stanley is poignantly portrayed by Ray Winstone (COLD MOUNTAIN) whose own men are as ruthless and uncivil as any of the so-called bad guys except, perhaps, Arthur Burns, the oldest brother, who commands a cult-like gang of wild Irish outlaws who are intimidating enough to play for the University of Miami football team.

"What is an Irishman but a nigger turned inside out?" asks John Hurt, as Jellon Lamb, a bounty hunter also on the trail of the Burns gang. "I came to this beleagured land and the god in me evaporated."

Yes, 1880's Australia is a bleak, unforgiving Hell made even less appealing by the urine-drenched lens of Cinematographer Benoit Delhomme, whose sickly yellow-tinted barren landscapes will do nothing for the tourist industry in Oz. Add in the ever-present flies and I think I'll pass on Quantas' Get-Away Bargain Fares. (Flies even sabotage the bonus segment interviews seen on the DVD -- hasn't anyone down under heard of Vapona pest strips?)

Danny Huston (THE AVIATOR, THE CONSTANT GARDENER), David Gulpili (RABBIT-PROOF FENCE, WALKABOUT) and Emily Watson (GOSFORD PARK, THE LIFE AND DEATH OF PETER SELLERS) round out the excellent cast -- especially Ms. Watson whose underplayed performance as Martha Stanley, the Captain's wife, is nothing short of remarkable.

The climatic Christmas Day dinner makes this one of my favorite films to re-screen during that harried holiday period. Accordingly, I can assure anyone whose family is a bit misanthropic (or considers themselves Compassionate Conservatives) that they will find THE PROPOSITION not only a worthy addition to the Western canon, but a fine stocking stuffer as well.
Posted by Robert A. Nowotny at 8:20 AM