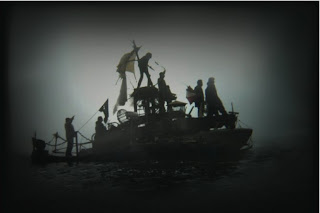 The previous accomplishments of the Court 13 coterie are well known to anyone who follows the short film genre. EGG, DEATH TO THE TINMAN, THE ORIGINS OF ELECTRICITY and JETTISON YOUR LOVED ONES are among the best shorts produced over the past few years, and so GLORY AT SEA!, the latest production to come from Benh Zeitlin, Par Parekh, Ray Tintori et al, was highly anticipated. The wait was well worth it.

This cinematic jambalaya which explores post-Katrina New Orleans is so emotionally riveting, so inspirational and so lovingly crafted you will never forget the viewing experience. Never. Like Katrina, GLORY AT SEA! is a Category 5 event by all standards imaginable.

The brilliant screenplay by writer/director Zeitlin is loosely based on the Orpheus myth, although in this case Hades is an underwater hell, not a flaming inferno. The horrific tragedy experienced by the residents of the Crescent City could not be more vividly portrayed than by seeing the condemned souls of those who perished now planted at the bottom of the ocean, much like undersea corn stalks, each alone, lost, without hope. However, one of these Katrina victims doesn't belong here, yet, as he still has the slightest bit of life beating within. He is jettisoned from this watery grave only to find a dystopic landscape of equally lonely and lost, but living, souls. As this lone underwater survivor begins to build a raft he is joined by a cadre of other survivors, each desperately seeking some sense of reunion with their departed loved ones. Eventually the makeshift raft is completed and it sets sail. What happens next is not going to be divulged here; simply put, it is something every reader of this review must personally see and experience for themselves.

Virtually all of the actors were actual survivors of Hurricane Katrina with little or no acting experience. All are absolutely wonderful, and many of the scenes and props and accoutrements found in GLORY AT SEA! were brought to the film as the result of their personal Katrina experiences, lending a realism and a poignancy that is impossible to forget. As for the film itself, Dan Janvey, Josh Penn and "Producer Par Excellence" Parekh have pulled off what appears to be the impossible. This was a tremendously ambitious undertaking and the production values are impeccable. Editing, cinematography, production design, music -- the list goes on and on. Collectively, every facet of the filmmaking process is so well done that GLORY AT SEA! will undoubtedly raise the standard by which all future short films will surely be judged.

Some years ago Francis Ford Coppola was asked who the next notable American filmmaker might be. His response: "Probably some little fat girl from Ohio." We still await the arrival of Coppola's little Buckeye; in the meantime, one can surely look to Zeitlin and Parekh and the rest of the Court 13 International personnel based in New Orleans (and elsewhere) to rightfully take their place among the next great generation of filmmakers on the horizon.