SNAKES ON A PLANE 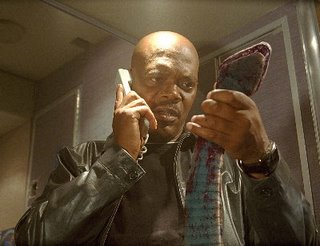 "SNAKES ON A PLANE is a cheese crust pizza with double cheese topping. It's so bad it's gouda!" Jim Slotek, Jam! Movies

Replete with green-tinted ViperVision and some good old fashioned "hissssteria", SNAKES ON A PLANE is a throwback to the glorious days of the highly entertaining Hollywood exploitation pictures that dominated the release schedule of a number of smaller studios in the 1950s and 1960s. Think American International and Cannon Films. Think Roger Corman, even Russ Meyer (God rest his soul), and you will understand why SNAKES ON A PLANE possesses such strong appeal. If only they had shot this in 3-D! If only I had seen this at a drive-in theater! My, oh, my, wouldn't that be something?

Of course, the first thing you should know is that prior to boarding Pacific Air Flight 121 you will need to not only check your baggage, but your disbelief needs to be safely stowed in the overhead compartment as well since continuity problems could diminish some of the fun. Simply stated, several scenes don't make any sense, and the not-so-climatic landing of this big old Boeing 747 at LAX lacks not only plausibility, it may very well be the worst directed non-pilot landing of a commercial airliner in movie history. But guess what, I didn't care and you won't either because now that the aircraft is safely on the ground all you will want to do is paraphrase Herve Villechaize's immortal line, "De Plane! De Plane!"

A big part of the fun is to guess which of the passengers will survive and which will not. There are few surprises, although I will admit that I was wrong concerning several of the characters. That's good; it keeps things interesting. And the body count is staggering -- not even a gaggle of circus geeks could have thwarted the hundred or so venomously voracious reptiles from wreaking havoc.

The bottom line: One of the greatest movie titles in cinema history delivers exactly what it promises. As the film's tagline says, "Sit back. Relax. Enjoy the fright."

An aside: I was thrilled to see that one of the primary casting directors for SNAKES ON A PLANE was Coreen Mayrs. Several years ago Coreen won the Bob Award at the Crested Butte Reel Fest for her short film, THE REMEMBERER. Since then Coreen has become one of the most successful, sought-after casting directors in Canada. Way to go Coreen...
Posted by Robert A. Nowotny at 1:11 PM