THE LIVES OF OTHERS 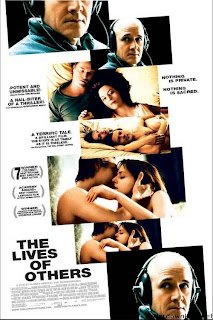 One critic has called THE LIVES OF OTHERS "a perfect movie." Winner of the Academy Award for Best Foreign Language Film, there's no denying that Florian Henckel von Donnersmarck has crafted a remarkable motion picture in his directorial debut. This clearly is one motion picture that will stay with you long after the lights come up and the popcorn has been depleted.

Ulrich Muhe is brilliant as Hauptmann Gerd Wiesler, a mid-level officer in the German Democratic Republic's secret service -- the Stasi. Appropriately, the year is 1984, and Hauptmann Wiesler is assigned to oversee the round-the-clock surveillance of Georg Dreyman, a popular writer who has exhibited no signs of disloyality to the state, and his live-in girlfriend, the acclaimed actress Christa-Maria Sieland. Sebastian Koch is excellent as the gregarious Dreyman. This goes double for Martina Gedeck as the vivacious, but vulnerable Sieland. These three outstanding performances, under the steady direction of von Donnersmarck, combine to deliver a heartwrenching, complex, suspenseful thriller of political and moral relevance as well as an unforgettable cinematic portrait of oppression and, surprisingly, compassion. 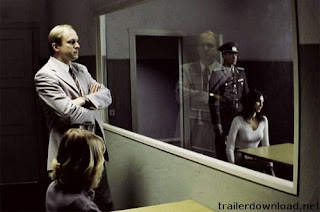 Before the fall of the Berlin Wall the Stasi had over 90,000 employees in a country of only 16 million. In addition, hundreds of thousands were recruited as "unofficial employees" who, for any number of reasons, spied on their neighbors, their co-workers and their families. This Orwellian nightmare of state-sponsored voyeurism had a shattering impact on even the most ordinary citizen -- but the atmosphere of secrecy and justified paranoia also affected many of the Stasi spies. What makes THE LIVES OF OTHERS so compelling is to see and viscerally feel the effects of what this policy can do to Big Brother as well.

(One can only wonder why governmental wiretapping is declared fascist when performed in other countries, but is deemed a "patriotic act" here in the USA.)
Posted by Robert A. Nowotny at 7:06 AM