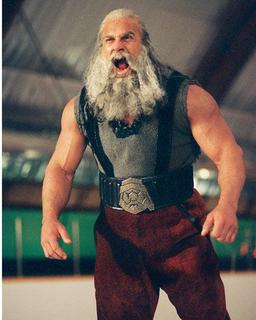 Yes boys and girls it is that time of year again -- the first new Christmas movie of 2005 premiered on Spike TV at 8:00 p.m., Tuesday, October 25. I use the word "movie" loosly as this cinematic effort is so pathetically appalling it consists, at best, of a series of filmed images slapped together with about as much inspiration as I get when I see the latest image of Jesus Christ on a tortilla (another seasonal event, especially down here in Tex-Mex Country).

SANTA'S SLAY is insipid. SANTA'S SLAY is inept. SANTA'S SLAY is inbred. You read that correctly -- I said "inbred" since this is the only conceivable explanation why those with the money and the power gave Mr. David Steinman the green light to write and direct. I didn't know Jews were into inbreeding, but this is surely proof positive. To spare further embarrassment this man must be summarily circumscised from the rolls of working writers and directors living in LA-LA Land and/or Lapland.

But not all is a waste. At Christmas time one should always look for a silver lining so let it be said that SANTA'S SLAY has one redeeming scene which takes place right off the bat when Santa, menacingly portrayed by ex-WWE wrestler Bill Goldbeg, comes down a suburban chimney and slays Fran Drescher. I guess I've been a good boy -- one of my Christmas wishes has, indeed, come true.
Posted by Robert A. Nowotny at 8:11 AM