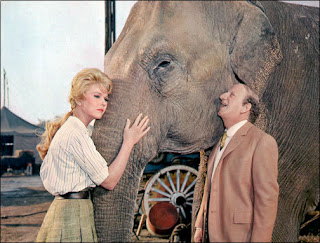 One of the all-time great movie lines occurs in BILLY ROSE'S JUMBO, a 1962 M-G-M feature that takes place in and around a circus. In the film Jimmy Durante is trying to sneak past a policeman with an appropriately named Jumbo in tow. The suspicious cop stops him and asks, "What are you doing with that elephant?"

Forty-five years later I was reminded of this scene when I first read about the remarkably secret construction of the largest, most opulent embassy on the face of the earth. When completed it will equal in size the entire Vatican, so gigantic, in fact, that I'm told it will become the only diplomatic outpost ever to be visible from space.

Twenty-one buildings spread over 104 acres, complete with a beauty shop, a barber shop, a gym, a spa, tennis courts, a movie theater, the largest swimming pool in the country and restaurants serving US food chain favorites.

Apparently our Department of State wants to supersize everything, not just a Happy Meal.

Of course, the embassy will have its own water wells, electricity plant and wastewater treatment facility, thus making it 100% independent from any and all city utilities. That's smart, since the embassy is presently the only major U.S. construction project in Iraq that is even remotely on schedule.

The current cost to American taxpayers is a staggering one-half billion dollars. That's a pretty penny especially since the embassy is conveniently located along the banks of the Tigris River within easy mortar fire range of anti-US forces in the capital. Some have already called this compound "Mortaritaville." Others have labeled it the "Fortress of Folly." One-half billion dollars is a lot for what will surely become an irresistible bull's-eye. At least the roof is being heavily reinforced in deference to that little incident in Saigon some years ago.

Yes, one-half billion dollars for construction and another $2.8 billion earmarked for "operations" in the year 2008. Just think how many "Shoot-N-C Targets" that will buy you at Cabela's. No wonder the current administration continues to keep this White House Elephant under wraps and doggedly denies any kind of planned permanent plantation (for lack of a better word) in the Middle East.

As Jimmy Durante would say, "Inka dinka do."

Yes, there's denial. A whole lot of denial as well as this interesting comment by President Bush during his infamous "Mission Accomplished" speech: "We're helping to rebuild Iraq, where the dictator built palaces for himself, instead of hospitals and schools."

I guess the hospitals and schools will come, eventually, perhaps even "undeniably."

Goodnight, Mrs. Calabash, wherever you are...
Posted by Robert A. Nowotny at 12:14 PM