THE GRILL AT LEON SPRINGS


It reigned supreme in the meat market bars and restaurants of the eighties and nineties. It, coupled with a bottle of gawd-awful chardonnay with the buttery, oakey flavors of California, and the men among us would be guaranteed a score in triple digits. “It” is King Salmon, prepared any way you wanted, topped with (insert topping of choice here) usually some kind of teriyaki glaze. Well, its’ days are numbered for I have been to the kitchen top and have seen the light.

Higher than Salmon in those supposedly good for you fats and omega three stuff, the new kid on the block is Kona Kampechi, a South Pacific fish or, more specifically, Hawaiian (hence, I suppose, the word Kona). Reminds me a bit of grouper or even amberjack. This flakey, hearty, meaty fish stood out on my plate during a recent foray to The Grill At Leon Springs. The fact that The Grill is located in the original Romano’s Macaroni Grill building in Leon Springs, Texas, just north of San Antonio off Interstate 10, doesn’t hurt. A lot a great food passed out of that kitchen before Phil Romano sold out to Brinker International and the concept became just another “me too” Italian restaurant.

This time I dragged Friend with me for a change. Both our wives were conveniently out of town working so the two of us could afford to play. I caught some hell for that one. Oh, well….some of us eat to live while the fortunate among us live to eat. 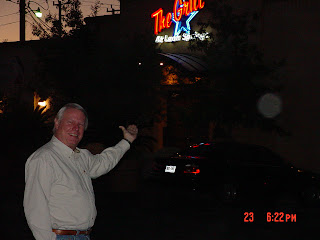 The first thing you notice about The Grill is the old limestone exterior. Once inside, you see a contrast of the old with new all around as well as a humongous wine room….wonder if they seat in there or is a bit on the chilly side? Friend and I were seated by Liza (with a Z) who immediately spotted us for trouble. She pawned us off on Jenn, a comely young lass of college age….in fact Jenn informed us she was a communications major at UTSA…and quickly added her boyfriend worked in the kitchen, should we get too rambunctious. However, after a couple of pre-dinner beverages and a glass or two of wine I told her to bring him on. Fortunately, (for me) she declined. But I digress.

Friend and I settled in for what appeared, from the menu, to be an excellent selection of everything from Pasta to Seafood to Lamb Chops and Pork Tenderloin with a variety of “side” stops in between. I was ready to jump on the Walnut Blue Cheese Salad and move on to Spring Rolls of shrimp, crab and pork and then, assuming there would still be room, make my entrée in the form of Chicken Picatta, and of course, saving room for dessert of an individual Chocolate Soufflé. (I’m stuffed just writing all of that.) Fortunately, cooler heads prevailed when Friend decided on the Grilled Rainbow Trout for himself, served with a Tomato/Caper Relish, Roasted Potatoes and Grilled Veggies….all for $15.95….very reasonable once I saw the size of serving and quite well prepared. Friend was pleased with his choice. 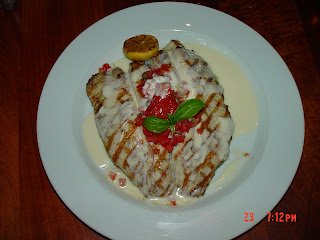 Sweet Jenn got my attention with one of the off-menu specials, quite often the best way to go. She offered up a fish I had never heard of….Kona Kampechi. She described this as being higher in those good-for-you fats and oils than Salmon. Since you already know I despise Salmon, this sounded like a viable option. It came topped with four Grilled Shrimp and just a “hinted at” Honey/Teriyaki Glaze (will anybody ever come up with something besides Teriyaki for a glaze?) over a Toasted Sesame Slaw which was really Sautéed Julienned Leeks and Carrots. I don’t know where the sesame flavor was supposed to come from unless it was done in a bit of toasted sesame oil. No toasted sesame flavor but none the less, quite good….and only $22.95. Having never before had Kona Kempechi, let alone heard of it, I knew not what to expect, only to discover my new, favorite fish. 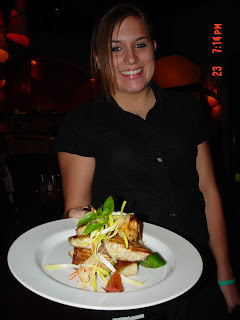 It was surprisingly flaky and solid at the same time, holding up well and not falling apart. The larger-than-I-could-eat serving was properly grilled, not even the least bit tough or dry, something easy to let happen if you don’t pay attention to it. In one word, outstanding. I recommend a New Zealand Sauvignon Blanc with either of the seafood dishes we had. Really, any dry white should pair nicely but for gawd sake, stay away from that 1980’s style California Chardonnay with its oakey, buttery aftertaste.

By now Friend and I were bordering on the full mark but I persuaded him to try an individual Chocolate Soufflé for dessert. We both ordered one and should you do so, turn in your request with your entrée so you don’t have to wait so long. A good server should be able to time it out so there’s no overly long wait as we had. Unfortunately the wait wasn’t worth it. I do love soufflés and know a good one when I taste it. Sadly though, ours were on the cakey side, as if they were made with too much flour and not enough egg white….or perhaps mixed a bit too long knocking out all of the air, for ours were anything but light and airy. While Chef Tomme Johnson certainly knows his fish, he might double check the soufflé recipe. (Really a small disappointment when you consider the damage we did overall). Hint….don’t pour the Grand Marnier sauce over the Chocolate Soufflé….BAD combination. They need to offer a Grand Marnier Soufflé with that sauce.

This is a restaurant I will return to. There are too many other possibilities on the menu that sound delicious. Unfortunately a lot of people know about this place so, on the weekend, make a reservation.

Salmon, if there is a Neptune in the sea, your days are relegated to patties in the school cafeteria line. On second thought, that food is bad enough without forcing the kids to eat that crap every Friday.
Posted by Robert A. Nowotny at 9:47 AM