Tim O’Brien has a gold mine in the desert, at least as far as the desert goes in the hill country of Texas. Located on Texas Highway 46 in the nearly extinct community of Bergheim, about twelve miles west of U.S. 281 in what can only be described as a former Service Station/Grocery/House combination, O’Brien’s serves up what they describe as “Good Home-Cooking”. Yes and no. Yes, what we had was reasonably good and No, quite a bit of it was never found on your mother’s table…unless your mother served up Smoked Chicken and Bleu Cheese stuffed Mushrooms as an appetizer (by the way, lacking in Bleu Cheese flavor)…but only $7.99.

There was a constant undercurrent of something just not being “quite right” throughout the evening. I don’t think it had anything to do with the fake (I despise the word Faux) cow hide table coverings which, upon closer inspection, turned out to be vinyl. I imagine real cow hide would be impractical owing to all the food that would constantly get spilled on it…but why cow hide at all? What’s wrong with white linen? Nor can I solely blame the “gas station/house-like” interior. After all, that’s what this place was at one time, I’m sure. But it appeared as if there was no effort to improve the overall ambience, to make this a real dinning pleasure…and ambience goes a long way in creating an enjoyable evening. Although it can’t save bad food, it can add to good food to create a great evening of dining out and I think this is what O’Brien’s would like to become…a destination restaurant…which is what they are right now only because of their distant location…but I digress.

Their menu is an amalgamation of what one might consider Gourmet dishes such as Escargot in garlic butter with a pastry topping, the aforementioned Mushrooms, Pescado St. Lucian (I have no idea what the hell that means nor could our server explain it), the chef’s choice of Fish Blackened with Shrimp then baked to finish in a cilantro cream sauce, to a more localized -- for Texas anyway-- Fried Jalapenos, Macaroni and Cheese (excellent, by the way) and the ever standard Chicken Fried Steak…which recently received the People’s Choice Award from the San Antonio Express News. I ask again, what do they want to be? 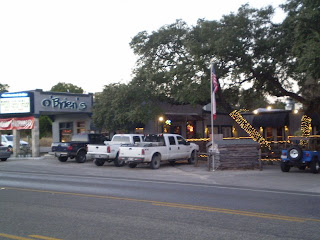 My recent dining excursion resulted in mixed emotions. It began with my appetizer of two rather bland Crab Cakes ($11.99) served with remoulade and Peckin Slaw (a disgusting name for an ordinary German style cole slaw…and all I did was peck at it). The crab cakes had the texture of over mixed tuna fish, the kind my mother served me when I was a kid. There were no chunks to it. It was stringy and mushy…perhaps too much filler, but I doubt made with lump crab meat. While the 16 oz. Pork Chop ($20.99) was served as requested (medium-rare) and lightly smoky, the sun-dried cherry, chipotle and molasses glaze was dropped off on the side of the plate rather than topping the chop, as described in the menu. While this may seem a minor infraction, it made for a disappointing experience in eating as the flavors were not constant in every bite. My companion’s selection (once again I had managed to sneak out without the child bride of nearly forty years) began with the bleu “cheeseless” mushrooms followed up with an entrée of the Herb Crusted Rack of Lamb ($26.99) served with a dried fruit compote. I can only imagine the mixture of herbs, but, unfortunately, it came out covered in what can best be described in appearance as burned parsley…most unfortunate because the flavor of the lamb was quite good and cooked to a “just right” medium-rareness. The dried Fruit Compote was mostly dried apple rings but still went nicely with the lamb chops.

We enjoyed a soft Estancia Pinot Noir with our meat dishes and very enjoyable it was. The dessert offerings were limited to the usual “some kind of chocolate cake concoction, cheese cake, ice cream, etc., etc”…nothing really creative or different…so we opted to drink our dessert in the form of Irish Coffees. Having recently returned from Ireland and enjoyed a real Irish Coffee from the location where it was created, in Foynes on the Shannon River, I’m a bit spoiled and sorely disappointed in what they passed off on us…no sugar to sweeten the whiskey…sweetened whipped cream (I’m sure out of an aerosol can) on top instead of just lightly whipped cream (no sweetener…it’s already in the whiskey) spooned over the coffee. Then they topped that with crème de menthe…gawd awful. If you’re going to serve a classic, serve it the correct way. If you’re going to bastardize it…give us fair warning. 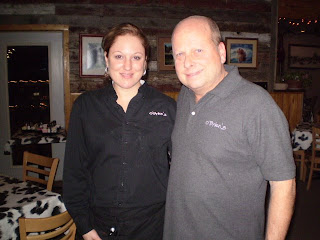 Our server, Sasha (pronounced with a flat A, Texas Style, as in bash and cash, not pronounced with a soft A, European style, as in posh, she was quick to point out) tried almost too hard most of the evening. She informed us this was only her second week on the job and she was enthusiastic. There’s no faulting her for that. She just seemed a bit smarmy. The owner, Tim O’Brien, stopped by our table…a nice gesture. He commented that things were finally heading in the right direction after several months of upheaval with the staff. I hope he chose the right direction for his restaurant because right now it just doesn’t knock your socks off…good, but not yet ready to be considered great. In fairness, I’ll return, hoping the gold mine in the desert has a bit more sparkle next time.
Posted by Robert A. Nowotny at 4:28 AM