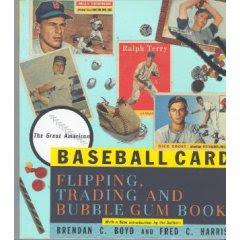 The following is from THE GREAT AMERICAN BASEBALL CARD FLIPPING, TRADING AND BUBBLE GUM BOOK:

"Elmer Valo was a journeyman outfielder who managed to stay in the major leagues for twenty years. He was an average hitter, but an exceptional pinch hitter, particularly in his later years. What I will always remember Elmer Valo for, however, will be his spectacular catches in deep left field in Philadelphia's Connie Mack Stadium, catches that inevitably had him crashing into the wall and crumpling dazed to the ground, with his glove in the air and the ball still in it." 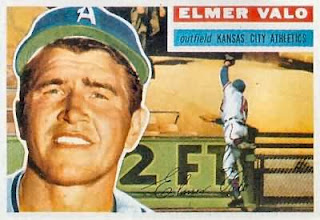 To my knowledge, Elmer Valo is the only Czechoslovakian-born player to reach "The Bigs." That, alone, makes him one of my all-time favorite players. After all, I am proud of my Czech heritage and so I followed Elmer Valo's career far more closely than that of more famous ballplayers like Mickey Mantle or Willie Mays or Wayne Terwilliger.

The Great One's nickname -- "Wall Crusher" -- is both descriptive and accurate. There is some dispute about whether or not he entered the final game of the 1939 season as an 18-year-old pinch hitter. Many claim this did actually happen, although the official records do not confirm this. (If he did play the team would have been heavily fined since he was not at the time officially listed on the Phillies' roster.) I mention this, because, if true, his major league career would have spanned a remarkable four (4) decades. 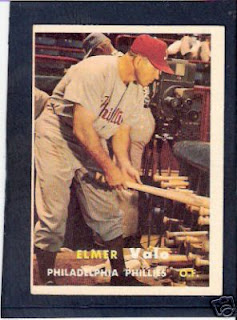 Two more things about Elmer. His baseball card photos were often far above the average -- this one with the triple lens TV camera in the background being just one example. Also, believe it or not, during his long, productive playing career Elmer Valo reached base as often as Joe DiMaggio.

That's extremely good company to be in, and so I cannot help but be puzzled as to why this talented, unassuming fellow isn't a household name -- except in his hometown of Rybnik, Czechoslovakia.

Pilsner Urquell anyone?
Posted by Robert A. Nowotny at 1:31 PM