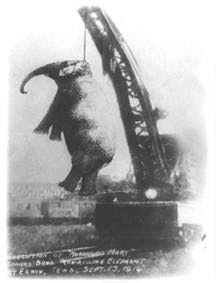 Mary was billed as "the largest living land animal on earth." At least that was how Charlie Sparks, the owner of Sparks World Famous Shows, promoted her, claiming she was three inches taller than Jumbo, P. T. Barnum's famous pachyderm. At 30 years of age, Mary was five tons of pure talent. It was claimed she could "play 25 tunes on the musical horns without missing a note." Perhaps more intriguing, she was the pitcher for the circus baseball team and her batting average of .400 "astonished millions in New York."

On Monday, September 11, 1916, Mary was given a new "trainer," a totally inexperienced drifter named Red Eldridge who had dropped into town earlier in the day from a passing Norfolk and Western boxcar looking for some quick cash. That afternoon he marched beside Mary in the circus parade in St. Paul, Virginia, a tiny mining town in the Clinch River Valley. Witnesses claim that what Mr. Eldridge lacked in handling skill and knowledge, he more than made up for it with go-for-broke bravado. A small man carrying a big stick...

The next day the circus was in Kingsport, Tennessee. It was here that Mr. Eldridge met his demise. The details vary, but what we do know is that Mary was suffering from two abscessed teeth which caused her such agony that she went beserk when her new trainer slapped her one too many times with his stick. These infections were, of course, discovered only after Mary was killed.

Regardless of the exact circumstances, the ultimate end was the same -- a man dead. Old Testament frontier justice had to be served. Man's insatiable hunger for grotesquery had to be satisfied.

Guns, of course, were the first course of action. Blacksmith Hench Cox fired his 32-20 five times at Mary; the bullets hardly phased her. Sheriff Gallahan "knocked chips out of her hide a little" with his .45, according to witness Bud Jones. But as the circus manager stated, "There ain't gun enough in this country that could do the trick."

Some suggested hooking Mary to two opposing railroad engines and dismembering her, or crushing her between two facing engines. Both were dismissed as too cruel. And so it was decided, instead, that "Murderous Mary" would be hung by the neck from a derrick car.

More than 2,500 witnesses gathered to watch Mary swing near the powerhouse at the nearby Clinchfield Railyards in Erwin, Tennessee. The roustabouts chained Mary's leg to the rail while they struggled to get another chain around her neck. When they began to lift her up the crowd was horrified to hear the bones and ligaments cracking in her tethered foot. She was lowered and released from the rail and a second attempt ensued.

It doesn't seem surprising that the chain from which Mary hung snapped shortly after she was raised off the ground. It was, after all, just a 7/8" chain and Mary weighed 10,000 pounds. She hit the ground and sat upright, immobilized from the pain of a broken hip.

A stronger chain was attached, the winch was put into motion yet again, and this time Mary died. They left her hanging for a half-hour and then dumped her in the grave they had dug with a steam shovel.

There is a final irony, one that firmly places Mary's murder in a specific time and place. You see, some oral histories claim that Mary was not buried but burned on a pile of crossties. According to the March 1971 issue of the Tennessee Folklore Society Bulletin, author Thomas Burton reports that this inaccurate recall "stems from confusion of the hanging with another incident that occurred in Erwin, the burning on a pile of railroad ties of a Negro who allegedly abducted a white girl."

There is an antique shop in Erwin memorializing -- or should I say capitalizing -- on Mary's death. The owners of the Hanging Elephant Antiques Shop sell T-shirts emblazoned with Mary's likeness, which also graces the side of their building. I think I may go there some day. If I do, I'll be sure to bring some crossties and a Zippo.

(Inspired by an article appearing in Blue Ridge Country Magazine)
Posted by Robert A. Nowotny at 11:32 AM