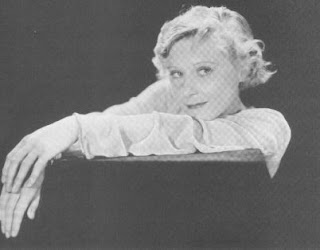 Needtovent is pleased to announce a new series which we will simply call FASCINATING WOMEN OF THE PAST. Our first installment concerns the young actress who became a symbol of failure and tragedy -- Hollywood Style.

On Friday, September 16, 1932, Ms. Entwistle jumped to her death from the "H" of the famous Hollywood sign (which then read "Hollywoodland"). Her body lay in the 100-foot ravine below until it was found two days later. Acting on an anonymous tip, a detective and two radio car officers found the body of a blonde-haired, blue-eyed woman who was moderately well-dressed. She remained unidentified for over two days until her uncle saw a newspaper article which provided a description of the event including a reprint of the suicide note that was simply signed with the initials "P.E."

After identifying her body, Harold Entwistle filled in some of the blanks for authorities and the press. Apparently Entwistle was upset at not being able to impress the studios, and she told her uncle that she was going to walk to a nearby drugstore and then visit friends. Instead, she made her way up the southern slope of Mount Lee, near her uncle's home, to the foot of the Hollywoodland sign. After placing her coat, shoes and purse containing the suicide note at the base of the sign, she made her way up a workman's ladder to the top of the "H". The cause of death was listed by the coroner as "multiple fractures of the pelvis."

"I am afraid, I am a coward. I am sorry for everything. If I had done this a long time ago, it would have saved a lot of pain. P.E."

Ironically, several days later Entwistle's uncle opened a letter addressed to her from the Beverly Hills Playhouse; it was mailed the day before she jumped. In it was an offer for her to play the lead role in a stage production in which her character would commit suicide in the final act.

But that's not the end of the story. 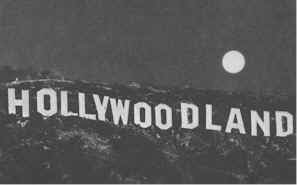 In the years following Peg's suicide, hikers and park rangers in Griffith Park have reported some pretty strange happenings in the vicinity of the Hollywood sign. Many have reported sightings of a woman dressed in 1930’s era clothing who abruptly vanishes when approached. She has been described as a very attractive, blond woman, who seems very sad. Could this be Peg’s ghost, still making her presence known? Could she also be linked to the pungent smell of gardenia perfume which has been known to overwhelm sightseers in the park? Perhaps it is, as the gardenia scent was known to be Peg’s trademark perfume.

In 1990, a North Hollywood man and his girlfriend were walking on a Beachwood Canyon trail near the Hollywood sign with their dog when the animal suddenly began to act very strange. Instead of running around on the trail and through the brush as he normally did, he began to whine and hang back near the couple. They had never seen him act that way before and could find no cause until they spotted a lady walking nearby. One thing they noticed about her was that she was wearing clothing from the 1930’s. However, thinking that you could see anything in Hollywood, they didn’t pay much attention.

The lady however, seemed to be walking in a daze. Thinking that perhaps she was drunk or on drugs, they started to steer clear of her when she suddenly just faded away before their eyes. At that time, they had no idea who Peg Entwistle was, nor that she had committed suicide nearby, or even that her ghost reportedly haunted the area.

Another eyewitness is a Griffith Park ranger named John Arbogast. In an published interview, he revealed his own encounters with the ghost of Peg Entwistle. He stated that she normally made her presence known very late at night, especially when it was foggy, and always in the vicinity of the Hollywood sign. He also claimed to have encountered the scent of gardenias in the area as well. “I have smelled it several times,” he said, “and always when any flowers around have been closed because of cold weather. I don’t think I have ever smelled it in the summer time.”

Arbogast’s duties as a ranger often involved the Hollywood sign itself. He explained that in recent years, alarms systems have been installed near the sign to keep people away from it. There is always a danger of vandals, and of course, potential suicides. The alarm systems incorporate the use of motion detectors and lights to keep intruders away.

Arbogast recalled a number of times when the alarm system indicated that someone was close to the sign, even though a check by the ranger revealed no one was there. “There have been times when I have been at the sign,” he said, “and the motion detectors say that someone is standing five feet away from me...only there’s nobody there.” 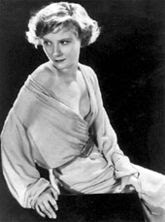 So, what could have made Peg Entwistle choose to end her life in such a dramatic and violent way? No one knows, but we have to wonder. The Hollywood slogan states that the sign exists as a symbol of hope, so that those who answer the siren call of Hollywood will know that anything in the city is possible. But did Peg glimpse that sign one evening, after spending the day going from one pointless casting call to another, and see it not as a symbol of hope, but one of despair? Did she feel that sign mocking her, laughing that so many others had made it in the movies...so why couldn’t she?

Did the glowing lights of the sign remind her of why she had come to Hollywood, chasing the bright lights she would never catch up to? Or did she just want to go out in a way that people would remember? Unfortunately, we may never know... 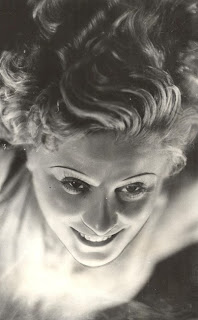 Before closing, it is also worth noting that Peg's ex-husband, Robert Keith, had a son, Brian, from a prior marriage. Peg's brief stepson Brian Keith grew up to become a famous actor, best known for his role as "Uncle Bill" on the hit TV show, "Family Affair." Brian Keith also committed suicide in 1997.

(This fascinating story was initially brought to our attention by Frank's Reel Reviews, Findadeath.com and Wikipedia -- selected passages from each of these websites were reprinted in the preparation of this posting)
Posted by Robert A. Nowotny at 8:31 AM