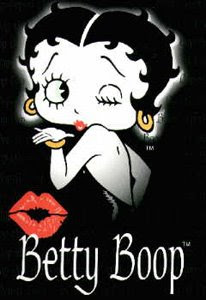 "With a head like a giant peanut, vast mascara'd eyes, too-kissable lips, baby-doll voice, flattened marcelled hair, and mere threads of a dress exposing miles of hot flesh, she was the perfect celluloid sex toy."
(Brightlightsfilm.com)

I don't know about the "giant peanut" head, but there's no denying that Betty Boop is one hot mama. In fact, the Intergalactic World Headquarters for Needtovent has three (yes, count 'em -- 3) framed Betty Boops adorning the walls. Originally created by Fleischer Studios animator Grim Natwick as a canine side-kick for a cartoon dog named Bimbo, Betty morphed into the sexy gal we all know and love today in "Betty Co-Ed," the first of over one hundred Boop cartoons that followed. The year was 1932, and with a figure modeled after Mae West and a singing style "borrowed" from Helen Kane, she became the most alluring cartoon Betty of them all. (Admittedly Betty Rubble was pretty hot as well...certainly more enticing than Wilma Flintstone when you stop and think about it).

But what do you know about the real-life Betty? 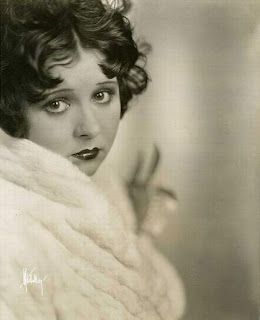 As previously mentioned, her name was Helen Kane. Born August 4, 1904, Ms. Kane was a popular American singer, best known for her "Boop-Boop-a-Doop" trademark and her signature song, "I Wanna Be Loved By You".

It has been reported that Kane's mother reluctantly paid $3.00 for her daughter's costume as a queen in Kane's first theatrical role at school. This meager expense proved to be a wise investment; Helen went on to perform professionally onstage with the Marx Brothers not too long after she reached her fifteenth birthday.

As she took on the status of a singing sensation there were Helen Kane dolls and Helen Kane look-alike contests, appearances on radio and in nightclubs in addition to her continuing to tour the Orpheum Circuit. By late 1928 and early 1929 she had a huge cult following. With the advent of the Betty Boop cartoons, however, Helen began to feel her celebrity status was being infringed upon and she sued Paramount Studios and Max Fleischer charging "unfair competition and wrongful appropriation." Unfortunately, she lost this $250,000 lawsuit, and although she continued to perform, her popularity was never the same. Ms. Kane died September 26, 1966.

"I Wanna Be Loved By You"

You are Ms. Boop and Ms. Kane -- we at Needtovent love everything about you both.