IF YOU DON'T KNOW WHERE TO GO FOR SPRING BREAK

As some of you know, I was born and raised in central Texas. In the mid-1960s, my little hometown decided to erect new highway signs at the city limits on all roads to New Braunfels. These decorative and expensive signs were adorned by a little grandfatherly cartoon Kraut in lederhosen who, as I recall, was smoking a pipe. This full-color image of a German "Opa" was designed to coincide with the heritage of German settlers who chose this area because the moss on the trees reminded them of sauerkraut and the crystal clear waters of the Comal River (often referred to as "The Shortest River In The World") provided cool refreshment and sustenance from the hot Texas sun.

Of course, these darling city limits signs were immediately stolen by misguided miscreants as soon as they were replaced, and so several years later both the City Council and the Chamber of Commerce surrendered and the signs no longer marked the entrance to this charming village with a cenral plaza that Norman Rockwall would have loved and with a high school whose unique mascot was the Unicorn. Make that a "Fightin' Unicorn."

Surprisingly, the fine students at NBHS never took to adopting a one-digit, graphic hand gesture as a symbol of Unicorn pride. After all, the University of Texas is just 70 miles up the interstate where the beloved "Hook 'em Horns" sign is embraced by Bevo and Longhorn fans worldwide. Seems like "shooting the finger" would provide a little festive phalange fun for New Braunfels High School students and alumni alike. Then again, descendants from the Fatherland aren't known for their sense of humor.

In case you haven't already done so, take a close look at the map above. When you do, you'll find a small village with a most unusual name. Austria is known for its strudel, hills that are filled with the sound of music, and being the birthplace of that charming little fellow named Adolph Hitler. Step aside Pennsylvania -- you may have Blue Balls and Intercourse, but Austria has you topped. 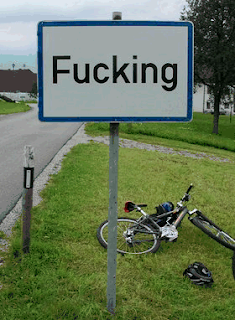 I wonder what Lenny Bruce would think. I wonder what George Carlin would say. I'm wondering what Paris Hilton will do when she learns about this place.

Lots of other thoughts cross my mind. For example, I wonder what the Fucking High School's sports teams are named. Let's see -- charming Williams College in Williamstown, Massachusetts calls their team the "Ephs." (I don't know why.) Yep, the Fucking Ephs (or even the Fucking A's -- as in Oakland) might work, but I kinda think that the Athletic Director at Fucking High School may have looked elsewhere, perhaps all the way to L.A., and thus he may have selected the name "Trojans." For Pete's sake, I hope he did.

No matter what the village is like or what their high school teams call themselves, not all is idyllic. As the following newspaper article clearly describes, there seems to be a bit of a crime problem: 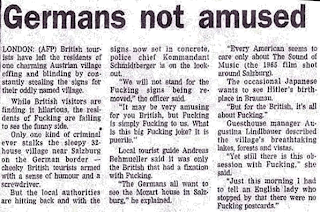 It is obvious that Chief Kommandant Schmidtberger believes this is a major problem, but on the other hand this could actually become a public relations bonanza. And so I think back to my home town of New Braunfels which once experienced a similar "problem." My suggestion would be for the Fucking City Council and the Fucking Chamber of Commerce to go ahead and embellish their signs by adding a little grandfatherly cartoon Kraut in lederhosen. But instead of holding a pipe, I think this "Opa" should be giving the hand gesture for the "Fightin' Unicorns" instead.

No -- I don't expect this will stop thieves from stealing the signs, quite the contrary. I'm certain misguided miscreants, English and otherwise, would steal them at even a faster clip. But the attendant publicity would be enormous and I'm betting that college students worldwide would quickly discover a brand new place to go to do you know what...
Posted by Robert A. Nowotny at 11:25 AM