There are probably over one hundred movie review websites on the internet. Some are extremely insightful and entertaining -- need I mention Neetovent.com? Most, however, are fairly weak efforts that aren't exactly a waste of time, but they rarely deliver anything the reader probably doesn't already know. And then there's MOVIE SMACKDOWN! which promises "more fun, more value, more suspense."

What makes Movie Smackdown! unique is the structure created by Bryce Zabel, the website's Founder and Editor. You see, every movie review is a comparison between two motion pictures which share some kind of similarity. One is a current release that is still playing in theaters. The other is an older film that must be available on DVD or via some other non-theatrical method of distribution. The comparison is much like a Championship Fight and it is broken down into these sections:

* THE SMACKDOWN. This section explains why these two particular films are being put in competition against each other.

* THE CHALLENGER. This is the new film, the one that has just been released in theaters.

* THE DEFENDING CHAMPION. This is the earlier (generally successful) motion picture that the newly-distributed film is compared to.

* THE SCORECARD. This is the section where each film's strengths and/or weaknesses are compared and analyzed.

* THE DECISION. A winner is always declared; there are no ties allowed.

Another unique feature is that the reviews are not written by one single individual -- Zabel's Stable of reviewers is a panoply of pundits, a cadre of seventeen highly capable critics as diverse as any to be found anywhere. And, unlike other websites, a newly released motion picture might be covered more than once, being pitted against a different "Challenger" by different critics. This is usually done on opening weekend, but always while the new film is still in theaters. And, on occasion, a Smackdown! may be posted after a special preview screening -- thus appearing on-line prior to the film's arrival at the local cinemaplex and prior to it being covered on other websites and/or blogs. 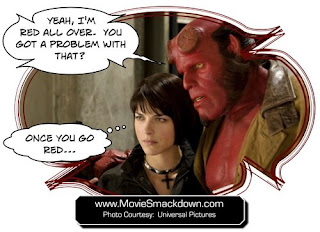 As the Ronco TV ads declare, "Wait, there's more!" One additional proprietary feature at Movie Smackdown! is the inclusion of what Zabel calls a "Comix" for each film being reviewed. Actual studio publicity stills are modified and the end results are always amusing. There's even a section where you can access a slide show of all the Comix that have appeared to date. No other movie review website has anything like this.