SURROUNDED BY ENEMIES: WHAT IF KENNEDY SURVIVED DALLAS?
by Bryce Zabel 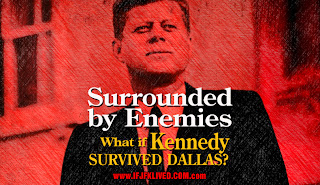 Alternative history fascinates me, as it fascinates all novelists, because “What if” is the big thing.
(Kate Atkinson)

Yes, life is full of “What ifs.” Some are of little consequence. Some are quite big. And some are very, very big – like the one posed by seasoned screenwriter and professional journalist Bryce Zabel in his latest book, “Surrounded by Enemies: What if Kennedy Survived Dallas?”

This is heady stuff, indeed, and to be a successful writer of alternative history one must accomplish several things: Is the book Meticulously Researched? Is the storytelling Thought-Provoking? Plausible? Provocative? And a non-stop Page-Turner? The answer in this case is yes, yes, yes, yes and hell yes.

Zabel elects to cleverly present his vision by way of a commemorative retrospective by the journalists working on the staff of a fictitious newsmagazine. After all, it will be 50 years since the tragic events in Big D snuffed out the life of one of America's most beloved Presidents. Fifty years since the hopeful, optimistic days of Camelot. And five decades for the majority of Americans who still can't help but wonder what really transpired at Dealey Plaza and then, just a day or so later, at the Dallas Police Station.

Clearly President Kennedy had enemies, powerful enemies within the Secret Service, the FBI, the Pentagon, the Mob, the Federal Reserve, as well as Pro and Anti-Castro Factions, Texas Millionaires and, of course, the Vice President himself, Lyndon Baines Johnson. All had motive and means to remove JFK from office, whether it be, initially, by bullets, or, by resorting to exposing the scandalous, emotionally-charged dark secrets of the Kennedy administration to an unsuspecting and naive nation.

By expertly balancing historical facts with plausible and insightful fiction, “Surrounded by Enemies” takes the reader on a logical, inventive, credible narrative that is clearly the work of a master storyteller. And from among all the possible conspirators, each examined separately and in detail, we do get a reasonable, albeit hypothetical answer to who was most likely responsible.  Speculative fiction at its best -- this is a bold, highly satisfying conclusion that places "Surrounded by Enemies" among the top “Never was but might have been” books in contemporary literature.