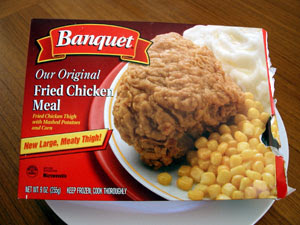 The intrepid staff at Needtovent's Intergalactic Headquarters is always on the search for a good meal. In fact, it can be safely said that we endeavor to literally have a banquet every night of the week. That's why we have secured the services of Jerry L. Nelson, our very own Captain of Culinary Candor, to discover for us and our loyal readers new gastronomic delights. Alas, Mr. Nelson's recent foray into the local restaurant scene failed to make a favorable impression. We hope you will enjoy Mr. Nelson's initial installment anyway. If so, please let us know...

Let me introduce myself. I am a foodie...that is, someone who likes and appreciates good food...usually no matter what kind it is. There are reservations, of course…liver should not be eaten by human beings...apparently this goes back to my childhood (for which I will blame a lot of things). My taste runs from steak to burgers and all of the stops in between. As a quick side note, steaks and burgers should only be eaten medium-rare. I challenge you to find a good burger place that will cook a burger medium-rare. The customer more often than not will be told it is against the law to serve a hamburger rare or medium-rare. To this I say Crap Salad...one of my father’s favorite expressions. I’ll explain just what it is some other time (no, it isn’t what you might think). The restaurant is just trying to avoid a suit for starting an e-coli outbreak to which I say, if they had good sanitation and food handling practices in their kitchen, that would not be a problem. If a restaurant refuses to cook a burger the way the customer wants it, don’t walk, run from the place. They don’t deserve your money.

While my parents were both good cooks, they had their limitations. About fifteen years ago I sought to overcome some of my limitations by indenturing myself to a Master French Chef for nearly two years in order to become a better cook. Let me define “indenturing” as working six nights a week in the kitchen of a four star French restaurant for free. I learned a hell of a lot. Now I can ruin food in at least three different languages.

In my quest for knowledge and gluttony I have read thousands of restaurant reviews and marveled at the glowing prose the reviewer spews forth in an effort to apparently win some kind of award. Are most of these people pompous?...you bet your ass, always using phrases like “velvety smooth sauce” or “light-as-air buttercream”. My position is, it’s either good or it isn’t and there are reasons for both. I will try to convey to you what was good about a food or restaurant or what was bad and why you should not waste your time or money going there.

There are certain words and phrases used in cooking...most of them come from the French. I will avoid these whenever possible, but when I must wear the mantle of a food snob at least you’ll get fair warning and some kind of definition. For too many years restaurant reviews have been written to appeal to the kind of people F. Scott Fitzgerald wrote about...the rich. Supposedly he thought they were different from you and me. Well, let me assure you, the Donald probably doesn’t have any more taste for fine foods than I do. Yes, he does have a bit more money but we all know money won’t buy any amount of taste, as evidenced by his hair style...but I digress.

This first installment begins innocently enough with a friend and a coupon for a free appetizer with the purchase of two entrées. Lesson learned up front. Avoid any place that has to give away food in order to sell food. If it’s any good at all, it will sell itself. You can sell steak in an outhouse if it is properly prepared. 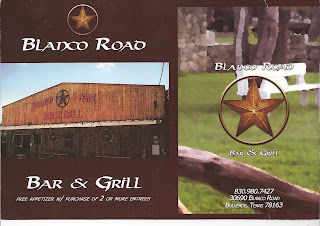 The establishment in question is the Blanco Road Bar and Grill located at 30690 Blanco Road in Bulverde, Texas. The coupon was a slickly designed mailer with great color pictures making one think this was a place of quality. Bar and Grill -- brings up images of a highly polished wood bar with mirrored back bar full of the finest spirits and wines available in the area and an array of imported beers chilling in the back room just waiting to be brought forth from the tap. Guess again, Jesse. When we walked in we were greeted by a woman who had a deeper cigarette and whiskey voice than any radio announcer could ever hope for. Had I not been aware of my surroundings I would have thought I had walked onto the radio set of the old Buster Brown Show and Froggy was getting ready to plunk his magic twanger. Lined up at the bar were five likely locals sucking down your basic Coors Light and Miller Lite. Madam cajones grande' spotted our coupon right away and commented we must be there for the free appetizer. We couldn’t deny it.

We were seated at your typical Lucy and Ricky kitchenette (Formica table top and chair with chrome and thinly padded seat). Miss Sharp Eyes came over to us and proceeded to tell us what was no longer on the menu...most of what was listed on the coupon. It seems they discontinued most of the entrees a few weeks ago. She said they weren’t selling very well. No steaks of any kind...the very things that brought us there. (Bad sign). Basically, the only things left on the menu were burgers, fries and, oh, the appetizers...nachos, fried mushrooms, jalapeno poppers of three or four different kinds, fried cheese sticks and chicken wings...you get the picture...whatever Ben E. Keith or Sysco Food Service sells.

Friend and I opted for the Bean and Cheese Nachos with the addition of ground beef and jalapenos...they can’t be real nachos without jalapenos. Friend also wanted an order of Onion Rings and we agreed to share both appetizers. We had not yet made up our minds which of the remaining entrees to have...perhaps I would throw caution to the wind and order the Ruben Sandwich if it was still on the menu. I hadn’t yet mustered up the nerve to ask, fearing disappointment.

I’m not much of a beer drinker so my snobbishness peeked out from beneath Lucy and Ricky’s table and I perused the wine list. Yes, they had a printed wine list...more than likely left over from their brief attempt to sell steaks because the first two wines I requested they did not have. Hell, I wasn’t asking for a ’47 Bordeaux from Chateau Lafite-Rothschild, all I wanted was something drinkable. They finally managed to find my fourth request...a simple Pinot Noir at a very inflated price of $36 bucks. My friend had a beer...he has much simpler tastes. The nachos were deposited on our table. Right away I could see this was a mistake. The cheese was beginning to blacken where it had been left under the broiler too long and dried out. The hamburger/beef was probably left over from that day’s lunch tacos, although I didn’t see them on the menu, the beans that were spread on the chips were from a can...nothing you can do about that unless you go to the trouble of mashing your own and I just didn’t see the Blanco Road Bar and Grill doing that. Friend and I choked down what we could. Friend even had another beer in an effort to wash away some of the edges of the place. At this point we were waiting on the onion rings. Maybe they would be our salvation. Well, the rings never appeared nor did our salvation. We quickly dumped the idea of entrees and I asked for the check...$48 and some change...tipped way too much and headed for the door when Raspy asked me for my number. I slipped her a business card and wrote a fictitious number on the back of it. I definitely did not want her calling the house. Had I thought quicker...it was probably the wine that dulled my reaction time...I would have given her Friend’s number, instead. After all, this place was his idea.

I must say, though, in defense of the Blanco Road Bar and Grill, the highlight of the evening was when frog in her throat’s daughter came in with her new puppy...a miniature something or other. She prefaced introducing the puppy to us with “I know this is against the law but I just couldn’t leave her outside alone. She’s so tiny." Had the daughter not been clutching the animal next to her rather ample cleavage I wouldn’t have looked twice...or maybe it was three times...I lose count when I drink wine. Unless you enjoy wasting your money on bad food and overpriced wine, don’t spend a dime at the Blanco Road Bar and Grill. They did have a slick marketing piece, though. It brought us in.
Posted by Robert A. Nowotny at 1:34 PM