A food revolution is sweeping the nation….in the form of a new version of meals on wheels. Now don’t confuse this with the charitable version, good thing that is. This is one being fostered by the food industry in the broadcasting world and a lot of chefs who apparently can’t get a gig in a regular restaurant….so they go out and create a restaurant on wheels….lots of “done over” Airstream trailers outfitted with restaurant quality kitchens instead of the sleeping and living areas and then gathered into one locale and serving up to the, often giddy, public, a variety of ethnic choices….My, what a wonderfully new idea….to this, I can only say balderdash.

Trust me on this, folks. We’ve had this idea around for years here in south central Texas….and I do mean years. The taco wagon has been a roadside fixture for longer than I care to think about at my age. I challenge you to travel the outlying roadways and non-major highways around any town or city of size and NOT see some enterprising soul trying to make a buck on the side of the road selling all manner of TEX-MEX delights from some form of kitchen on wheels. New idea?....crap salad…..but I digress. 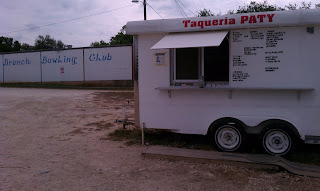 Having grown up in the shadow of San Antonio and, even as a teenager, made the required pilgrimage to the border and sampled street food at three in the morning when all you could think about was solid food in your belly regardless of the absence of neighborhood dogs, nothing compares in taste, quality and plain ol’ goodness to finding your own personal roadside taqueria. Now you don’t have to agree with me on this, for I do want you to seek one out and make it your favorite, but I have serendipitously stumbled across one I feel is unmatched in the area of Canyon Lake….and there are several to choose from….Tacqueria Paty….with one “T”. Her real name is Patricia, but I asked one of her erstwhile assistants one day why the one “t” and was told Paty just liked the look of it….so….Taqueria Paty, just south of F.M. 306 on U. S. 281 in the parking lot of the Spring Branch Bowling Club, open Monday through Saturday from 6:30 a.m. till 1:30 p.m. Breakfast fare is the big rush, but at any time during those hours you will see a parking lot variety of pick ups filled with construction workers to Mercedes filled with tourists needing sustenance before a day of tubing.

No matter what your want, she and her head cook, Lupe, will crank out some of the greasiest, drippiest, tastiest tacos you could ever wrap your mouth around. The menu isn’t just limited to the ubiquitous breakfast taco either. You can find a selection that will rival any seated service restaurant, from crispy tacos to mini-tacos to tortas to combination offerings. Paty offers eight different kinds of meat tacos with picadillo being my personal favorite along with carne guisada (there’s a big difference between Guisada and Asada….I learned the hard way), plus Chicharron’s, Migas, Papas Rancheras, Machacado and more. Saturdays see Barbacoa by the pound and for Pete’s sake, when you’ve had too much cerveza the night before, Paty and Lupe offer up some of the best Menudo around. Oh, you can be a weenie and get the Gringo version of Tex Mex by ordering a bean and cheese or potato and egg taco, but until you have had her chorizo and egg with salsa verde, you haven’t lived. Some of her extras include guacamole and pico de gallo with more cilantro in it than I’ve ever seen served on one taco. Next time you find yourself tooling down 281 just south of F. M. 306 and you have a “hankerin” for the original “meals on wheels,” pull on over into the Spring Branch Bowling Club parking lot and check out Taqueria Paty. As she says….if you want an order to go, have a compliment or even a complaint, give her a call at 830-885-2034. Try her offerings and you won’t really care what they’re doing in the big city with their fancy Airstreams….Paty’s been doing it for years, simply and fantastically.