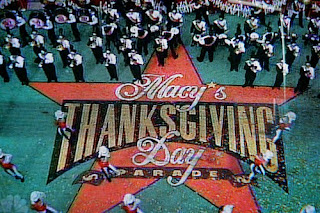 Yesterday's 83rd Annual Macy's Thanksgiving Day Parade was longer and more boring than a Southern Baptist Convention. Listed below are a half-dozen observations the Staff at Needtovent felt compelled to pass along...

1. Milton DeLugg was credited as the Musical Director for this event. Born in 1918, Mr. DeLugg is still going strong at the age of 91. We remember him best for his work on both Johnny Carson's TONIGHT SHOW and, later, Chuck Barris' THE GONG SHOW. Needtovent hereby salutes Mr. DeLugg whose musical interludes between singers and marching bands was a highlight of this year's parade. 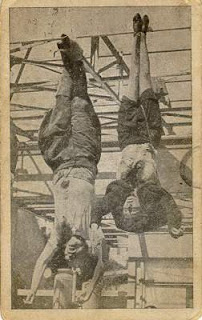 2. The most insipid, pathetic and annoying singing performance out of literally dozens must go to Mitch Musso, the Hanna Montana co-star, whose rendition of "Shout It Out" was literally projectile-vomit inducing. We can only hope that his fate mirrors another Musso of sorts, that being Benito Mussolini, shown above with his mistress, Clara Petacci. We've already bought the rope...

3. Macy's distinctive Red Star logo was displayed on more banners and vehicles than you'll see at any May Day Parade at the Kremlin.

4. We did find one commercial to be especially enlightening. Without doubt, Needtovent is firmly convinced that any toy manufactured by Fisher-Price is beyond banal. If you want to provide your child with even a modicum of intellectual stimulation, we strongly suggest that you do not purchase anything from this company -- their entire toy line is hebetudiness-inducing for even prenatal children. 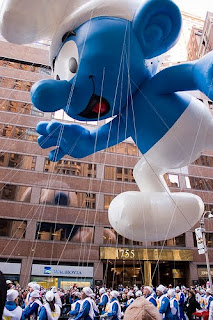 5. Among all of the big, inflatable balloons, only one got us thinking: If you choke a Smurf, what color does it turn? So much for intellectual stimulation...

6. And, finally, thank God for the Rockettes. Their gams were a Hell of a lot more fun to watch than any of the NFL's Thanksgiving Day games.