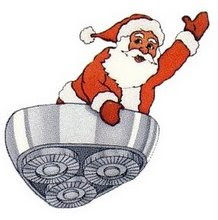 For many Americans, the Christmas Season doesn't actually get underway until the Noreclo Santa comes sliding down a snowy slope gleefully aboard his famous triple-headed toboggan. For the past few decades this endearing commercial has helped signal the official start of the Holiday Season; who would have ever thought such a festive sight contained a truly dark, terrible, insidious secret?

The famous Needtovent Research Lab, secretly ensconced somewhere among the towering peaks and verdant valleys of the Texas Hill Country (the local Chamber of Commerce's words, not ours) has just announced a horrific medical finding that may forever alter the morning ritual of men worldwide. All adult men should take heed...

No, this discovery has nothing to do with the morning constitutional -- a time-honored, albeit somewhat nasty tradition so embraced by the male population, especially the Alabama Redneck and the Oaxacan Wetback who have both elevated the sounds and quantities associated with the daily dump to incomparable heights.

Rather, this important health warning is issued to those who shave with electric razors -- Norelco, Braun, Remington, Panasonic -- the brand doesn't seem to make a difference. Thanks to the tireless efforts of Needtovent's chief laboratory researcher, Dr. Frederick Currey IV, MD, PhD, BPOE, it has now been proven without a (five o'clock) shadow of a doubt that microscopic hair particles resulting from the savage multi-blade cutting action found in virtually all electric shavers currently on the market are breathed in during the course of shaving, where they eventually find themseleves attached to the inner walls of the lungs. According to Dr. Curry, this invasive action of non-biodegradable hair balls (for lack of a better description) eventually causes such irritation and interference with the otherwise healthy lung tissue that cancer will likely result. This danger is so pervasive that Dr. Curry estimates that the death rate due to lung cancer among adult males caused by the inhalation of these tiny hair particles equals that of those who smoke three packs of Camels a day and, possibly, may even exceed those employed in Wiccan alchemy experiments.

The esteemed Dr. Curry's finding are now being sent to the American Medical Association and a phalanx of scientists at NASA, that quasi-governmental organization responsible for giving us Velcro, Tang and, allegedly, a couple of moon rocks. A separate file is being delivered via bonded courier to Mr. Oliver Biggers, the self-proclaimed arbiter of all human knowledge, known and imagined.

There will be more to come regarding this important medical health finding in the months ahead. In the meantime, consider yourself warned...