Pitchers and catchers reported to spring training this past week so I find my thoughts turning to baseball…for more than just a hot dog. Now in the world of baseball, a batting average of .300 over the course of a many year career will usually get you into the Baseball Hall of Fame. This percentage, very simply, means the batter was successful in three out of every ten attempts to hit the ball safely and get on base. Trust me, there are many more nuances to it than that, but in a nutshell, that’s pretty much the basics of successful batting. Mickey Mantle’s greatest disappointment in his storied career was his lifetime batting average fell to .298 as a direct result of his last two rather dismal years at the plate. Nonetheless, he was a success being a success less than thirty per cent of the time.

In the food world, like that of baseball, ownership expends money to assemble a team of players…managers, chefs, cooks, servers, and a clean-up crew, not to mention, most times the most expensive outlay, the facility where that team is going to perform. Now, if there was a baseball god in the heavens, the Texas Rangers would constantly be among the contenders, simply based on the quality of their facility. The Ball Park In Arlington harkens back to a simpler time in its purest form. But I digress. 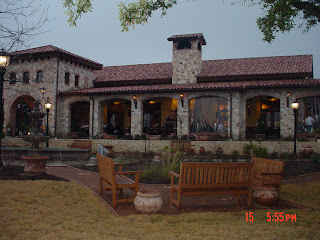 Taking in a most beautiful view of the Trattoria Lisina, the dining arm of the Mandola Winery, located on FM 150 in Driftwood, Texas, one begins to salivate with the thoughts about what Tuscan delights may soon be brought forth. If the money spent on the stadium, in this case the restaurant, is any indication, the diner is in for a gastronomic treat the likes of which the hill country has never seen. The visual ambiance is quite impressive from the open kitchen to the huge, indoor fireplace to the matching one on the massive patio (rumors are that Houston restaurateur Damian Mandola dropped well over a million bucks on this all-star facility). Bear in mind, a thirty per cent success rate will not get you into the culinary hall of fame. 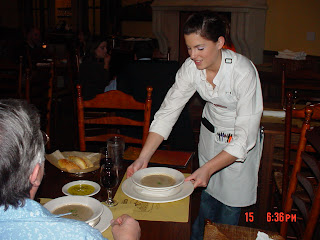 After warming up in the tasting room of the winery, my “Italian” Friend and I found ourselves being taken care of by the most charming and cute “as that bug in the ubiquitous rug” server named Zahra. She started us off with a Cream of Mushroom soup ($6) made from not just one or two different kinds of mushrooms, but in this case, four different bits of fungi…crimini, white portabellas, morels and button. Nice texture and aroma, but it needed a bit of salt to really bring it to life (base on balls with this dish). 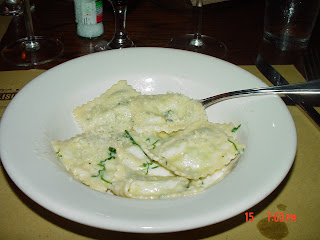 Being the gluttons for punishment we many times are, “Italian” Friend and I ordered three entrees for just the two of us. The first one served to us was a fast ball right down the middle of the plate or, rather, bowl…a serving of some of the finest ravioli it has been my pleasure to enjoy…in this case, four cheese ravioli with cream sauce ($12) and I have to say those four cheeses combined with the most tender pasta equated to a four bagger (baseball parlance for a homerun).

Unlike the ball park where beer tends to be king, this facility by law, being part of a winery, is allowed to only serve wine, although not necessarily their own. We enjoyed a glass each of a very nice Pinot Noir from the Arancia Vinyard in Italy ($10 and a solid hit). 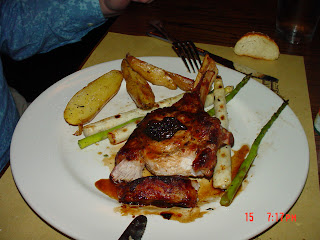 The entrees looked visually appealing. “Italian” Friend ordered the bone-in grilled Veal Chop with roasted fingerling potatoes and grilled asparagus, both green and white ($28), one of the night’s specials. Being a Red Sox fan, he certainly has known disappointment over the years, but not since the Bambino was sold to the “Evil Empire” has he felt value received for money spent was less than a fair deal. The chop was a bit on the small side, about three or four ounces too small (no size was quoted in the starting line-up), but the “grilled” flavor was excellent (score this one a fielder’s choice). My Gulf Snapper atop a bed of cannellini beans mixed with green beans, onion, tomato and bits of asparagus ($18) was attractive, but upon biting into the filet of fish it became just another ordinary fish dish on top of some kind of bean mixture. The cannellini beans might have been better in a bowl served with crusty bread; they didn’t belong under the fish (hit batsman…it was painful but at least there were now two runners on). 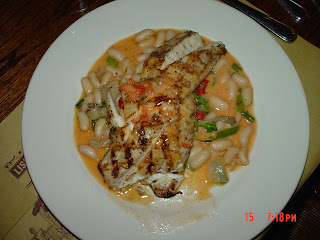 By now, we were deep in the late innings. It was dessert time. “Italian” Friend and I opted for a “pinch” hitter…instead of an item from the starting line-up, we signaled for samples from the Gelato bar. The team’s manager on duty, Jonathan Boyd, informed us Trattoria Lisina makes its own gelato. We began to drool, hoping to avoid accusations of a “spit ball." What a way to finish off the night. Maybe this would be that come-from-behind win that so thrills a cheering throng. Rich, thick, creamy gelato in a variety of flavors. The crowd was on its feet…the noise level rising as I requested coffee flavor and he indicated toffee flavor. They brought us both coffee flavor. Oh well, maybe the crowd noise created by the cement floor and high ceilings finally had an effect. Still, homemade gelato! Alas, the Mighty Casey couldn’t have been a bigger disappointment. It tasted and felt like nothing more than coffee flavored “ice cream," not the stuff “comebacks” are made of (this one was a called third with runners in scoring position).

The box score is not pretty. One run on two hits and quite a few errors with several left on base. A team can’t win every game, but it doesn’t have to…in baseball. This, unfortunately for the team from Trattoria Lisina, is the food game where everything served up needs to be a hit every time or, at least, a solidly connected fly ball that drives ‘em back to the warning track. The ballpark is beautiful, but the team needs more practice, for right now there are only a few all-stars in the game.

Ah, but hope springs eternal.
Posted by Robert A. Nowotny at 1:17 PM