If you venture out far enough into the, seemingly, most remote area of the Texas Hill Country near Bulverde, just north of San Antonio, you’ll stumble across this hill country restaurant and general store. Ah, General Store, where one can buy provisions for the long trip back to civilization and, perhaps, get a quick bite for sustenance. After all, from the looks of the giant Texas flag-painted roof, Specht’s has been in business since the fall of the Alamo, having taken up the flag and marched on to right where it is today, nine miles north of 1604 off Blanco Road, at 112 Specht Road, according to their web site, in San Antonio. 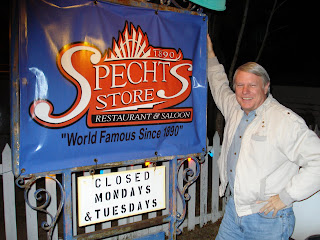 Actually it’s been in business since 1887, operating as a dry goods store, vaudeville house during the 1890s, a saloon and about the only place you could get a beer during prohibition. Current owner Kate Mangold took over in 1985 and added the restaurant and that’s what drew Friend, his Significant Other, the Child Bride of nearly Forty Years and me, to the place -- the food. That and the rumors of WW II soldiers bringing German POWs there in the evenings to chat with the local farmers and hoist a brewsky or two…you know, hands across the sea and all that.

You can read all about the history of the place on any one of several reviews posted on the walls with words like “SPECHTacular” or “beyond exSPECHTations”, the most recent being over ten years old. While the history certainly adds to the ambiance, we were there for two reasons, the food and the chance to talk with any of the remaining old-timers who might have some, heretofore, never published gossip about the place. 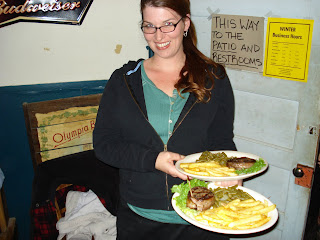 Alas, we had to settle for the groceries and our server, Liz, who admitted to us she had only been there five years and gave us a capsulated version of Texas history, circa 1930s and 40s. If only we had been thirty minutes earlier, she told us, one of the genuine “old-timers” was holding court at the bar (beer and wine only). There's live music every night they’re open (Wednesday through Sunday), but take the booth in the far back corner so you can still have a conversation all the while enjoying the music. On this night it was provided by Lynn Isaaks and her six string acoustic. 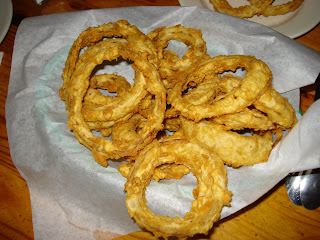 Let’s get to the food; I’m hungry. We started our adventure with two appetizers -- a small order of Jalitos ($3.95), nothing more than cream cheese stuffed jalapenos with ranch dressing for dipping…nothing special there, and then went for an order of homemade onion rings ($3.95). We were told the kitchen makes them fresh on the spot and doesn’t use the standard frozen product so many places do…and we were told the truth. A generous serving was placed on the table and managed to outlast the four of us. The only negative about them was the rings could have been a bit more crisp, but excellent as they were. We washed all the apps down with a bottle of Rosemont Cabernet Sauvignon (a very reasonable $18) chosen from a very limited selection of wines, but then I suppose this place did not get its reputation serving wine to those POWs. 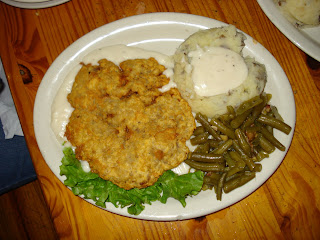 Understand this is no gourmet restaurant so don’t expect to find exotic creations on the menu. This is your basic, down home comfort food joint and don’t you forget it. If you order the CFS for $9.95 (chicken fried steak for you imports) or the 6 oz. fillet ($14.95) you won’t forget it. The Chicken Fried was fork tender sitting atop the homemade cream gravy with a generous serving of mashed potatoes adjoining it with more of the gravy in the well. Served next to all of that was an overly large pile of the freshest green beans made with chunks of real bacon for a flavor first created by your grandmother. If you’re not wearing an extra pound or two the next day, you just didn’t eat it all.

I’m always a bit suspect about steaks that are served by any place other than a “name” steak house…but if the quality and preparation of our fillets were any indication, you have no need to worry at Specht’s. Our steaks were prepared as requested, medium rare, and were fork tender. In fact, Liz, the five year vet, checked with the kitchen and assured us our steaks were just cut that day and would even be an ounce or two more than described…and she came through as promised. I’m embarrassed to say I left a bite of the most medium rare tenderloin fillet I have ordered out in years. I’ve paid more than twice as much at those high dollar steak places in the big city and gotten far less. 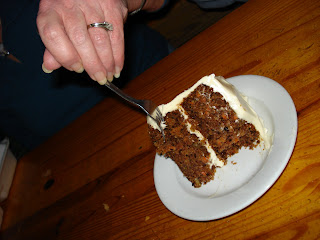 By now we were on our second bottle of wine, which doesn’t hurt the atmosphere at the table when someone mentioned dessert. Friend and his Significant Other both shook their heads in rejection leaving it up to the Child Bride of nearly Forty Years and me to make the rest proud. We ordered a slice of Apple Pie ($2.25) and what appeared to be half of a Carrot Cake ($4.95). I requested utensils for all. It’s a good thing I did for I would have been highly embarrassed had Friend’s Significant Other been forced to use her fingers on the Carrot Cake. The apple pie was homemade and outstandingly good, but the Carrot Cake stole the dessert award. Never before have I actually seen julienne pieces of carrot in a real Carrot Cake until this one. They are usually so chopped and cut up they get lost in the (food snob word warning) mélange of ingredients. Not this one…they were there and added to the texture rush. Order it, you won’t be disappointed.

Dan Christiensen, the cook for the evening, came out to our table near evening’s end to check on things…a likable sort, who’s been there just one month short of Liz. Maybe that’s why Specht’s General Store and Restaurant has lasted all these years…the help seems to hang around for years at a time in an industry where the turnover rate is traditionally sky high.

The only real disappointment of the evening (you didn’t really think I was going to finish without one, did you?) was there were no POWs with whom to quaff a brew or two. Oh well, I’m not up on my Arabic, anyway. But I’ll definitely go back for the food.
Posted by Robert A. Nowotny at 12:40 PM