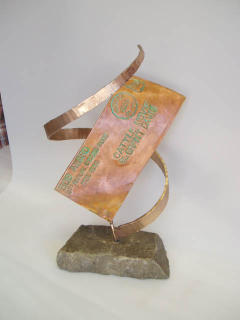 The Bob Award is given to the one entry at the Crested Butte Reel Fest which "pushes the envelope" the farthest. This year the award will be given to Grant Davis, a highly talented high school senior in Philadelphia whose short film is appropriately titled CATTLE MOVIE. It is unique, it is entertaining, it is going to be a huge hit on the film festival circuit and it cost less than one hundred bucks to make.

Of the six previous Bob Award winners, three were student filmmakers and two of these are now completing their first 35mm feature. Todd Rohal is in the final phases of post production on THE GUATEMALAN HANDSHAKE. You can learn more about this extraordinary project at www.ghandshake.com -- it is quintessential Rohal which means "you ain't seen nothin' like this before." Eduardo's film is CURANDERO and it is slated for a September 9th release by Miramax Films. His Bob Award-winning short was DAUGHTER, screened at Crested Butte in 2002; it remains the most disturbing short film I've ever seen, anywhere, anytime.

The 8th Annual Crested Butte Reel Fest runs from August 10-15. It will once again feature some of the best short films from around the world. Why not come and see for yourself?
Posted by Robert A. Nowotny at 12:54 PM