MIKE'S IN THE VILLAGE

As a small child back in the fifties I always marveled at how far away certain places were. It took days for my parents to drive us to my Aunt’s house for Christmas Eve, or at least it seemed like it even though we were only about forty miles away in reality. The Saturday morning trips during the summer to my Grandmother’s house in San Antonio to mow her lawn were an all day affair…just getting there. And the town of Bulverde (was there a real town or was it just some place on a map?)…Fuhgeddaboutit. Bulverde, or as the locals would say, BulWerde, was some place way far away…on the other side of the world. For that reason my parents never took me there and never went there themselves.

Thanks to the current trend of invading the hill country and depleting the Edwards Aquifer to nothing more than a trickle in Landa Park in New Braunfels, Bulverde now boasts subdivision after subdivision of multi-acre ranchettes brimming over with wannabe Texans. But I digress. 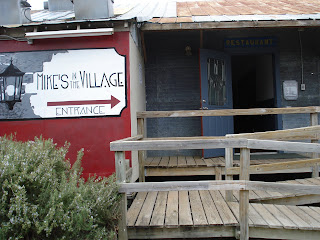 With growth come people. With people comes the need for places to dine out. Bulverde, being on the outer edge of the north side of San Antonio, has experienced phenomenal growth over recent years. Unfortunately, the dining options have not kept up in comparable numbers…but those numbers are gradually growing with the recent opening of Mike’s in the Village located on Bulverde Road just west of U.S. 281…in what area residents call "The Village."

Mike Romano came to this area from New Orleans pre-Katrina and had a successful catering business for a number of years before he decided to venture into the world of restaurant ownership…hence, Mike’s in the Village, his first stand-alone effort. 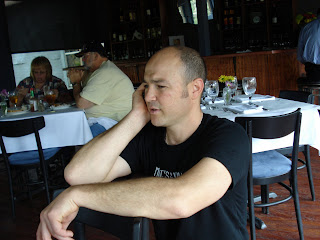 Mike stopped by Friend’s and my table on a recent lunch excursion to his newly opened effort. He’s a likable chap and I hope he succeeds because I’m selfish…I like to eat and, for the most part, his fare was quality. Friend started things off with a choice of the Tortilla Soup for an appetizer (does everyone serve Tortilla Soup?). While not “blow your socks off," it was adequate. Friend commented it had just a hint of a “Sherry” taste to it…certainly a unique twist to what has become a standard in the area. 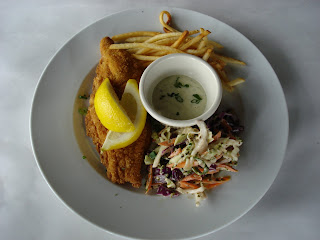 Our comely sever, Melissa, presented our entrees…Friend’s was Fried Catfish while I went for the Chili Relleno…not because I can’t live without Chili Rellenos, but more because of the description on the menu. It was described as being covered in Filo dough rather than battered and deep fried and the Poblano pepper was stuffed, yes, stuffed, not just filled, with a meat and multiple cheese mixture…something you don’t find too often. Most Poblanos are merely cheese filled and remind me of overgrown “poppers”. 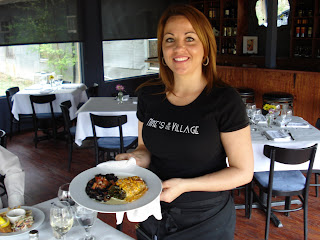 The only complaint Friend had was relating to the size of his serving. He felt two planks of fish would have been more adequate. He commented on this to “Mrs.” Mike and was assured it would be taken under consideration. His side of fries (which should have been homemade onion rings) were fresh cut, not frozen, and very close to genuine pomme frites…just a bit overly crisp. 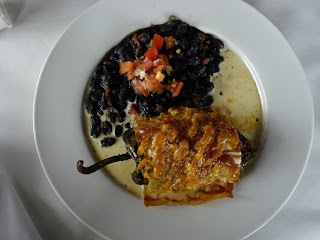 My Chili Relleno was incredible…no fried batter to obscure the taste of the pepper, rather a thin layer of Filo dough placed over the pepper and baked. The flavor of the pepper was sweet and bitter at the same time…a wonderful combination…plus, it had been seeded, allowing one to eat more of it. And the filling was just that, filling…and good. It came with black beans topped with, as Mike described it, a salsa pico, which helped the beans go down a bit easier. Very tasty. We washed all of this down with two different wines…Friend had a Cabernet Sauvignon, once again an establishment not having his first choice, and I swilled down an Argentine imitation of a New Zealand Sauvignon Blanc called UMA. Where was Letterman when you needed him?

What’s a good lunch without dessert? The lunch menu listed three options for us…bread pudding, key lime pie and the seemingly traditional crème brulee. Unfortunately, the bread pudding was still in the oven so we asked for one each of the remaining two. Friend went for the key lime and I took on the crème brulee. Now understand, I make a pretty respectable brulee myself, so I was going into this with a bit of an advantage over Mike…and, unfortunately, the first one I was served was less than good. The caramelized sugar topping was not…it was extremely grainy and not crunchy at all…and the custard was broken and had the texture of small grain cottage cheese due to the fact it was either cooked at too hot a temperature (optimum is 325 degrees) or it was left in the oven too long…both will do it. The second one I was served was no better. Friend’s comment about his key lime pie was it was a bit too "limey" giving it a high “pucker quotient”. I sampled it and must disagree. I thought it was perfect…but then, I guess that’s what makes a horse race. Next time I’ll have the bread pudding. It has to be great…after all Mike’s from Naw’lins.

The score for Bulverde dining now stands at five reviews and four recommendations. Interestingly, the one place I would not recommend, I have heard, has recently closed. I guess there is some justice after all. Who woulda thunk it fifty years ago when this place was on the other side of the world?
Posted by Robert A. Nowotny at 11:48 AM