The first time I can remember being in the old City Hall in New Braunfels, located at 200 North Seguin Avenue, just one block north of the plaza, was at the ripe old age of fourteen…and it cost me fifteen dollars…thanks to “Chapa the Coppa”, the youth of my era’s name for New Braunfels Police officer Raymond Chapa. I had my driver’s license for the grand total of thirty days when Chapa decided I was “driving beyond prudence.” All I knew was I was attempting to pass a much slower car on Landa Street when Chapa appeared out of nowhere, as he always did, pulled me over and posed the question, “Well, Brother Nelson, having fun?” to which my cleverness allowed, “I was until now.” We were friends from then on.

Fast-forward forty-five years to 2007, close the City Hall building to local government work and open a restaurant in the basement…specifically the Liberty Bistro. Open only since September of this year, Liberty offers a patriotic variety of lunch, dinner and Sunday brunch selections with a full bar. Having visited the basement bistro for dinner recently, my party came away with mixed emotions, leaning toward the positive…many efforts done well, some needing attention and one that just won’t go away without major expense in the form of sound deadening carpet to eliminate the raucous noise level that comes from a concrete floor. 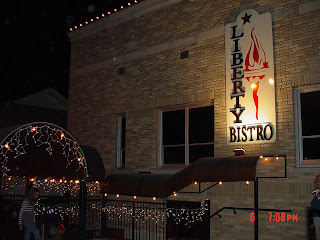 We chose our evening of dining to coincide with the recently held Wassail Walk, an event hosted by many of the downtown merchants in an effort to bring the citizenry out for a social and economic good time. Our server indicated the crowd inside the Bistro was more than the norm for a Thursday evening…continuous rather than fitting into a one hour window. Good for them. Bad for us.

We were seated among mirrored walls filled with portraits of former Presidents and their wives. I didn’t walk around to see them all, and could only identify Wm. Howard Taft, Eleanor Roosevelt, and had to be reminded which one was Lady Bird. I feel certain all of the others were accounted for.

The dinner menu reads like an American History book from my high school years with descriptions as T. Jefferson’s Tomato Bisque with Madeira ($3 for the cup and $5 for the bowl). Move on to the Johnny Appleseed salad or the Independence Caesar or the Liberty Salad (you get the picture). Friend and his significant other both chose the bisque for their appetizer and expressed no disappointment. The child bride of nearly forty years selected the Colonial Crab Cake ($12), Maryland style lump crab with Garlic Aioli and smoked Paprika sauce. The texture was proper and it definitely was made with lump crab meat. Great without dipping into the aioli -- but rather a bit of lemon squeezed over the top. 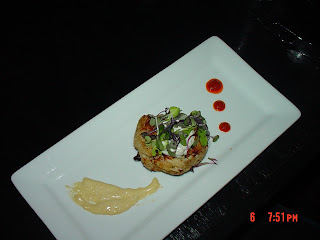 My choice of appetizer was the Liberty House-made spreads consisting of Hummus, Eggplant, and the best of the three selections, an outstanding Fig and Olive Tapenade with Goat Cheese ($9). The only downside to the dish was the extremely over toasted bread on which to spread your choices. I don’t mean burned…rather baked so long in the oven that the toast was dry and crumbly, not even a hint of softness. If I had wanted saltines, I would have ordered saltines. It made for “crummy” eating (pun intended).

Our wine selection proved a bit more elusive as the first two bottles requested were unavailable. It seems they only had on hand more expensive selections of the Malbecs listed. They did offer to split the price difference with our first selection, a less expensive choice…a nice gesture, but only after I asked. It seemed as if it took longer than necessary to return with the wine, but since we were saving it for the entrée, the breathing time would do it good.

The entrees continue on with the patriotic theme as in Friend’s choice of John Hancock Chicken ($16 for a half and $12 for a quarter), cooked under a brick ‘till crisp (I’ll take their word for it) accompanied by Liberty potatoes (nicely done au gratin style) and fresh green beans. The green beans were just right, crisp and fresh. His significant other settled for the Independence Caesar ($6), a bit on the small side for an entrée but understandable since it came from the salad listings, and to her liking. Only disappointment was upon searching, she found only one crouton and one piece of shaved parmesan. Good thing she added grilled shrimp to it. 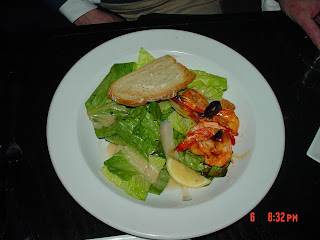 Child bride of nearly forty years chose the Costa Nostra Gnocchi ($16), house-made potato pasta and topped it with Bolognese sauce. The gnocci was the finest I have ever sampled, light and airy...like eating tiny little potato clouds, puffy and flavorful. DON’T order the Bolognese sauce on top of it. It turned out to be nothing more than flavorless meat sauce, no nutmeg and the texture was not that of a quality Italian Bolognese. This one was way too chunky. Try the Wild Mushrooms and Arugula…it just sounds good. 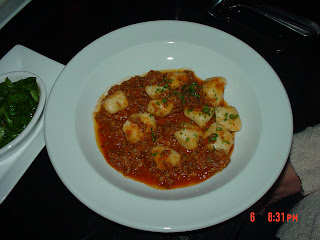 My entrée was the Little Havana Pork Confit ($18), citrus marinated and slow roasted for at least five hours served on Tostones with Black Beans. My Webster’s Collegiate Dictionary, Tenth Edition defines Confit (a French word…the "T" is silent and the "CON" is said up in the nose…maybe that’s why so many French have theirs out of joint…ultimately sounding something like CONH-FEE…) as a meat -- duck, goose or pork cooked and preserved in its own fat. It says nothing about slow roasting. I have always felt that if something indicates classic preparation, then do it that way or change the name. A much more indicative name would have been Little Havana Pulled Pork…and the Tostones, something I was unfamiliar with by name, turned out to be smashed Plantains formed into patties and then quick fried, appearing like kartoffel kuchen, but these were cold and tasteless…not hot out of the grease as our server described. The black beans were…black beans. The flavor of the pork was quite good.

The fact it took a bit long to get our wine should have given a hint of things to come…the wait between our appetizers and the entrées was way too long, nearing thirty minutes. When we were finally served, three lucky persons got their food right away while the fourth had to wait another three or four minutes before that plate was brought out from the kitchen. We noticed this same pattern repeated itself at the table next to us. Did they not have an expediter in the kitchen? (More on that later). Knowing they were crowded this night and seeing things were running slowly out of the kitchen, we ordered dessert at the same time as our entrées…individual soufflés. Our server told us it took between eighteen and twenty minutes to bake one so this would be the best way to ensure we were served in a reasonable time frame. Made perfect sense to us and we applauded his foresight. It just didn’t work out that way. After more than thirty minutes the soufflés appeared. The Viarhona Chocolate ($8) and the Grand Marnier ($7) each came with individual sauces to be added at the diners’ discretion…chocolate sauce for the chocolate soufflé and a wild berry sauce for the Grand Marnier. They need to lose the berry sauce…it overpowers the soufflé and offer, instead, a Grand Marnier sauce, easily made from cream and Grand Marnier liqueur. The soufflés were acceptable, not overly cakey but a bit short of outstanding. 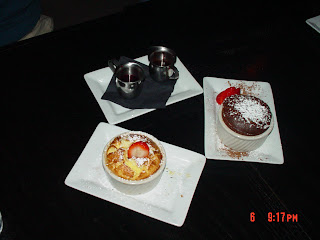 I think the service problems could be solved by improving the expediting or if there isn’t one, getting an expediter. This person’s task is to regulate the tickets given to the chef so he or she does not become overwhelmed and get “in the weeds”…restaurant speak for fall behind. He or she also makes sure what comes out of the kitchen is correct and that one ticket gets all items sent out at the same time…not one plate several minutes later.

To be fair, I must admit I have been nit-picky on some things, but when you’re spending a sizable chunk of change you have a right to expect things to flow smoothly and get quality offerings. New Braunfels needs the Liberty Bistro to succeed and I for one truly hope it does. There are far too few quality dining options in this area and the Liberty Bistro is very close to becoming one; I would much rather have spent that first fifteen dollars of mine on any one of their lunch offerings rather than line the coffers of the city government.
Posted by Robert A. Nowotny at 9:04 AM