Let me start by defining a Chef-Owner. Most small, independent restaurants are operated by what is referred to in the industry as “Chef-Owner"...people who both own the restaurant and perform as the chef in the kitchen. By the very word Chef, one gets visions of a person formally trained in some ethnicity of cuisine...be it French, Italian, Mexican, Indian, Asian, American (whatever that is), or some derivation on a theme. The operative words here are “formally trained”. Today’s chefs spend literally tens of thousands of dollars to achieve recognition from one of the dozens of culinary schools in the U.S. and abroad. However, there is another, far less glamorous way to be recognized as a chef and not just a “Cook” in the kitchen. You earn your “Chops”...a trendy word of which the 20th century equivalent was “Stripes”...the hard way, over years of work literally slaving away in the kitchen always creating something new and different with what is on hand, never relying on what you did yesterday, and taking the ordinary and pushing it to the next level...making a seemingly ordinary dish extra-ordinary. This is the case of Jesse Lopez of Papa Gallo’s located on U.S. 281 North in Bulverde, Texas.

For the last three years I have passed by Papa Gallo’s Restaurant hundreds of times and never given it a second thought. In fact the first thought I gave it was one of derision...I mean, how could a place that looks like an old house off to the side of a run down, small shopping center located on a busy U. S. highway be any good? Probably just another pile of Tex-Mex crap that tastes just like too many of the other piles of Tex-Mex crap I have eaten over the years. Well, Jesse and his family changed my mind on a recent visit. I mention family because most evenings Jesse’s wife works the register and his son and niece wait and serve.

Now all was not one hundred per cent but the good, nay, the great things, far outweighed the lackluster. Perhaps the best part of the evening was it was on a Monday and if you only knew how difficult it is to find damn near any place open on a Monday (reminds me of the theatre...all are dark on Monday to give the actors and actresses time to reconnect with reality, but then a good restaurant serving good food can be considered good theatre)...but I digress. 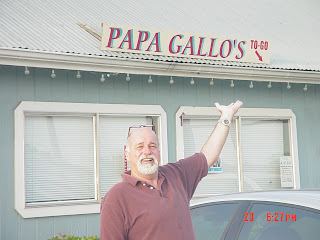 As we entered through a side door, Child Bride of nearly four decades and Friend and I commented on the almost full house as a positive sign. By the way, Friend was going out on a limb dragging us to this place after his most recent Blanco Road gastronomic gaffe.

We were seated at a corner table by the niece and given menus which featured the usual Tex-Mex fare but many of the items came with a twist. Papa Gallo’s has only a beer and wine license so I was a bit surprised to see what appeared to be rather large schooners of margaritas on several of the tables. When asked, the son explained they were made with wine but we would be hard pressed to tell the difference. He was right. One of these on the rocks with salt was a perfect way to wash down what turned out to be “larruping good” food. 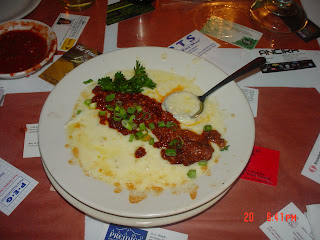 Our aperitivo (Spanish for appetizer for you mono-lingual souls) was the Queso Flameado con Chorizo. Translate that as flaming cheese with Chorizo sausage...an excellent combination if there ever was one. I specifically asked if the cheese would be flamed at tableside and was assured it would be. When it was brought out, there wasn’t a drop of brandy, or even rum, in sight...a minor setback because the taste of the cheese and the Chorizo was superb. Chorizo is a very greasy meat concoction and I say concoction because Chorizo is one of those foods you really don’t want to know what goes into it. Just remember it’s sausage, so be quiet and enjoy it. Unfortunately, the chips and salsa were a bit on the ordinary side. Jesse could do so much more if he fried his own chips and at least tweaked the salsa, regardless where it comes from.

For our entrees we each chose something different in order to sample as wide a variety as possible. The Child Bride of nearly four decades had her usual cheese enchilada with refritos and rice and a ladle of pico de gallo. The refritos were average as was the rice, but her cheese enchilada transcended the ordinary. It was moist and tender...yes, a cheese enchilada can be moist and tender. Friend had the Steak Tampiquena with all the accoutrements…. (He ordered his steak medium. I’ve already addressed that issue in an earlier review, but he enjoyed it so I guess there’s no accounting for taste). 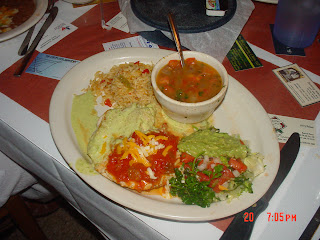 I had what the menu described as broiled marinated breast of chicken served with ranchero and tomatillo sauce and topped with mixed cheese or the Pollos dos Colores (two colored chicken).

Now, a tomatillo is very much like a green tomato in appearance and that’s where the similarity stops. Even ripe they are hard as a rock and have a thin little onion skin style paper covering which is removed. Tomatillos are used almost exclusively for sauces...a wonderful pastel green blending of spices and proper seasonings to make a flavorful covering for just about anything. Friend and I had the added bonus of ordering Borracho beans as opposed to the standard refries. They were, perhaps, the best Borracho beans I have ever had...filled with fresh slices of jalepenos and chopped onion and fresh cilantro. Muy delicioso.

I find it difficult these days to eat in quantity as I did forty, thirty, even ten years ago, so by now I was miserable...but over the years I have learned even when stuffed to the gills there is always room for dessert. If there isn’t an axiom for this affliction, there should be.

While we were still dining I spotted another table being served what appeared to be some sort of ala mode dish on a sizzling platter much like fajitas are served. Well, I had to have one, much to the consternation of the other two. It turned out to be nothing more than an ordinary piece of apple pie with ice cream but served with a sizzling sauce on a (I was right) fajita platter smoking right out of the kitchen. What Chef Jesse had done was take your basic restaurant pie to the next level...well worth the calories and misery it caused.

I will be back to taste as many of the other items I missed as I can. Hang in there, Jesse. Together, we’ll get through your menu.
Posted by Robert A. Nowotny at 1:19 PM