THE BAYING OF PIGS 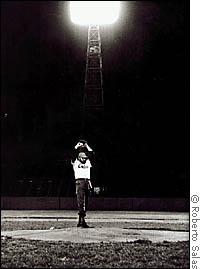 This week another egregious ruling was made by our favorite governmental agency. For reasons that verge on being unfathomable, those wily wildebeests at the United States Treasury Department have banned Cuba from participating in the upcoming World Baseball Classic.

For those of you unfamiliar with the WBC, it is an exciting new event for baseball fans worldwide. Sixteen national teams will compete in this international tournament comprised of many of the biggest marquee names in the game, each playing for their home country. Among the 400 all-stars committed to play are Roger Clemens, Barry Bonds, Sammy Sosa, Tadahito Iguchi, Omar Vizquel, Vinny Castilla and Alfonso Soriano.

Missing from the fray, however, will be the island nation of Cuba where their "field of dreams" is perhaps only second to our own. This is an outrage and a black mark in the world of sport as well as in the world of international diplomacy.

Many baseball fans have called the New York Yankees "The Evil Empire", especially those residing in Beantown. I say there is a more insidious evil among us -- it is the IRS and their brethren at the Treasury Department who have decided to stick their nose where it doesn't belong. In fact, the legitimacy of this fascist decision is so irrational I must assume Adolf Schickelgruber is spinning in his grave.

Even Yogi Berra is speechless... What must Cookie Rojas think???

(Yes, that's none other than Fidel Castro on the mound in Havana's Field of Dreams)
Posted by Robert A. Nowotny at 6:47 AM